This is the 26th consecutive month that the manufacturing PMI has remained above the 50-point mark. 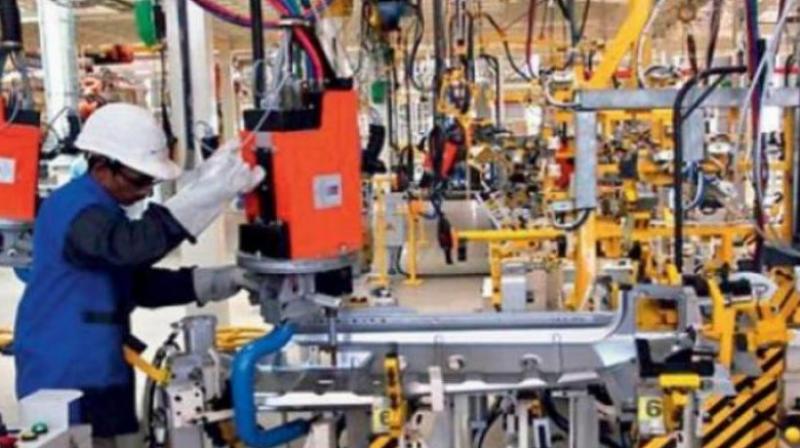 The IHS Markit India Manufacturing PMI was at 51.4 in September, unchanged from August and thereby posting its joint-lowest reading since May 2018.

The IHS Markit India Manufacturing PMI was at 51.4 in September, unchanged from August and thereby posting its joint-lowest reading since May 2018.

This is the 26th consecutive month that the manufacturing Purchasing Managers' Index has remained above the 50-point mark. In PMI parlance, a print above 50 means expansion, while a score below that denotes contraction.

"We've seen the gradual slowdown in manufacturing sector conditions continue in the second quarter of fiscal year 2019/20, with the PMI average for the quarter at its joint-lowest since the same period in 2017," said Pollyanna de Lima, Principal Economist at IHS Markit.

The survey noted that business confidence sank to one of the lowest levels seen in over two-and-a-half years.

Some firms expect a pick-up in demand and investment in marketing to lift output in the year ahead, while others were concerned about competitive pressures and tough market conditions.

"In September alone, forward-looking indicators such as business confidence and quantities of purchases were down, suggesting that companies are bracing themselves for difficult times ahead," Lima said.

On the prices front, input cost inflation moderated to one of the lowest rates seen in over a decade. Subsequently, there was only a marginal rise in selling prices.

"In light of the weak results for economic growth and muted inflationary pressures signalled by the PMI data, we expect to see further monetary easing in the months ahead," Lima said.

The central bank, which has already reduced the key policy rate four times in the current calendar year, is scheduled to announce its next bi-monthly monetary policy on October 4.

India's economic growth has slumped for the fifth straight quarter to an over six-year low of 5 per cent in the three months ended June as consumer demand and private investment slowed amid deteriorating global environment.