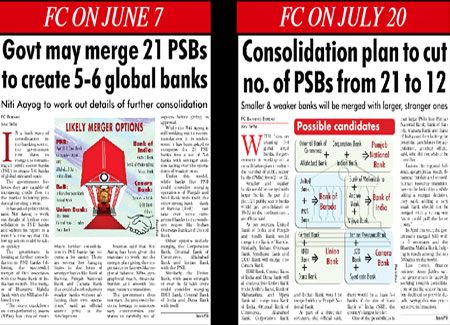 The government on Wednesday took bank consolidation to the next level.

It has proposed to set up a ministerial panel led by finance minister Arun Jaitley to examine and oversee the merger of 20 state-owned banks.

The ministerial panel, referred to as Alternative Mechanism, will give in-principle approvals to proposals of banks for their amalgamation.

The members of this mechanism will be decided by the prime minister, but are expected to include Jaitley and minister of road transport and highways Nitin Gadkari.

Finance minister Arun Jaitley told reporters after the Cabinet meeting that the decision regarding creating strong and competitive banks would be solely based on commercial considerations and the proposal to merge would have to come from respective PSU bank boards.

After an in-principle approval from this panel, banks will have to abide by market regulator Securities and Exchange Board of India (Sebi) and the Reserve Bank of India regulations.

The final scheme will be notified by the central government in consultation with the Reserve Bank of India (RBI).

“The alternative mechanism will help fast-track approvals,” Jaitley said, adding, “The objective is to create strong entities and any decision regarding consolidation will be based on commercial feasibility.”

According to sources, banks that would be merged would be chosen based on four factors —  profit, similar geographical coverage, comparable asset quality and capital adequacy ratios.

At present, there are 20 public sector banks, apart from the State Bank of India (SBI).
“The decision is expected to facilitate the creation of strong and competitive banks in public sector space to meet the credit needs of a growing economy, absorb shocks and have the capacity to raise resources without depending unduly on the state exchequer,” said a statement on the PIB website.

The Cabinet decision comes shortly after the SBI merged with five of its associate banks and The Bharatiya Mahila Bank in April this year to form the 45th largest bank in the world.

However, the point to note is that while the merger did not face any major hurdles from bank unions, it did led to SBI's gross non-performing assets touching 10 per cent during the first quarter ended June 30, 2017.

In 1991, it was suggested that India should have fewer but stronger public sector banks. However, it was only in May 2016 that effective action to consolidate public sector banks began to be taken by announcing amalgamation of six banks into the State Bank of India.

The merger was completed in record time, unlike earlier mergers of State Banks of Indore and Saurashtra, the PIB release said.

Giving details about the benefits of the SBI merger, the statement said, “SBI is now a single bank with about 24,000 branches, over 59,000 ATMs, 6 lakh PoS machines and over 50,000 business correspondents, which serve all parts of the country, including far flung areas.

Indeed 70 per cent of SBI’s network lies in rural and semi urban areas. In that sense, the bank serves to unite India through a uniform banking culture.

It also has a significant international presence, and is one of the largest global banks. Loans to the small businessman and to farmers have become cheaper as SBI offers the lowest lending rates.

More than 8.6 lakh merchants have been on board on BHIM Aadhaar, Bharat QR and POS, increasing the digital banking footprint. SBI has successfully raised Rs 15,000 crore QIP.

“The measures could include a combination of capital-raising from the market, dilution of government holdings, additional capital infusion by the government, mergers based on strategic fit, sale of non-core assets, etc.,” he said.