There are numerous tales of sportsmen who have cheated to win. Are we justified in booing them when they make a comeback' 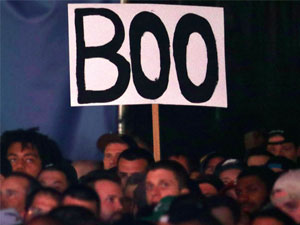 Close-In: Will you forgive tainted sportsmen?

The accusations against and the ban on sports personalities who then return and compete once again in their sport, makes one wonder about the sanctity of true sportsmanship and integrity.

Justin Gatlin was booed after winning the 100m race in the recent IAAF World Championships. The defeat of the crowd’s favourite, Usain Bolt, could have been one of the reasons for the crowd’s behaviour. But the main reason for it was Gatlin’s two previous bans for drug abuse. The people have not forgiven him for his crime. Similarly, we have seen the departure and return of the popular tennis star, Maria Sharapova, and so many other such athletes. A shocking revelation was Lance Armstrong in cycling. One had marvelled at his tenacity and performances. The world was in a state of shock when he was caught taking performance enhancing drugs.

Linford Christie, the famous 100m runner from England told me how helpless he felt in the 1988 Olympics when he ran against Ben Johnson, who later was disqualified for using drugs. Christie did go on to win an Olympic gold but his career got tarnished as well, when he also tested positive for drugs. He conveyed to me his innocence and was found not guilty, but one could feel that the stigma of being branded a cheat still rankled in his heart.

There are numerous such tales of sportsmen who have cheated to win and improve their performance for monetary or personal gains. In most cases nothing major comes of it and the sports personality is forgiven finally.

The recent Kerala High Court order to lift the life time ban from cricket imposed on S Sreeshanth by the BCCI once again brings to the fore as to whether a sporting institution should accept to revoke their earlier decision or not. The disciplinary committee headed by Arun Jaitley was the one to enforce the ban on the former Indian cricketer. If there was no evidence to implicate him and his two other Rajasthan Royals colleagues, one feels sorry that the career of these cricketers was so thoughtlessly disrupted.

The popularity of cricket in India has further increased on account of gambling. The Lodha committee’s report has so correctly highlighted it and even recommended that the best way forward would be to legalise gambling. The committee apparently also handed over a sealed envelope with the names of some tainted players. One gathers this was not disclosed by the Supreme Court of India for reasons best known to them.

The beginning of the 21st century had brought Indian cricket to its knees. The reason being that some of the superstars were presumed to be involved with betting and match fixing. The Tehelka report and the book, The Fallen Heroes, had the transcripts of interviews and conversations that to most of us, quite clearly indicated that there was some truth to the shocking revelation. Hansie Cronje, the then South African captain confirmed his involvement in match fixing and named some of our Indian cricketers as well. Indian cricket was thrown into a complete turmoil and some players were banned for a specific period or for life. Most of them at present, surprisingly, are still very much the face of Indian cricket as coaches, commentators or consultants. Mohammed Azharuddin, facing a BCCI lifetime ban was exonerated by the High Court and so the BCCI finally had to accept revoking his ban as well. With the way things have finally emerged, not a single cricketer has actually been found guilty.

The legendry Kapil Dev whose name had popped up in the betting fiasco is another prime example. A television interview had grilled him into a state of tears. He was a sad reflection of himself and a dejected soul, who could not come to terms with being ignored by the very people who had worshipped him only a while ago. His phone barely rang and he felt alienated by the public, his cricket colleagues and some of his close and dear friends.

This takes me back to the days when I was the head of Wisden in India and had to go to Delhi to invite Kapil Dev as he was one of the contenders for the Indian Cricketer of the Century award which was held in England in 2002. He was finally chosen as the winner. On receiving the award, the then prime minister, Atal Bihari Vajpayee sent him a congratulatory message which made his life take a turn for the better. He was back as a hero and the fame and recognition that he got coming back to India with the World Cup in 1983 repeated itself and he became the darling of Indian cricket once again.

One hears of similar tales of cricketers from Pakistan, South Africa, Australia, New Zealand and the other cricket playing countries. There are only a few cases of players actually being prosecuted. The ICC has tried to put in a structure and an agency to monitor activities such as spot and match fixing and betting, but although they have put in some very strict regulations, the betting mafia seems to slip through the network.

The lure of easy money is very tempting in developing countries such as ours. Many of the cricketers are from poor families and, therefore, prime targets for the wheeler dealers. The youngsters at times also get themselves into a mess due to the temptation of the good life they get used to.

The questionable issue is whether we as cricket lovers should forgive sportsmen who have gone awry and been adequately punished. The answer is not so easily forthcoming.