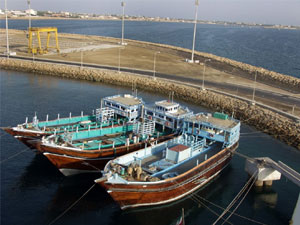 Minister of road transport, highways and shipping, Nitin Gadkari’s visit to Tehran to attend the inauguration of Iranian President Hassan Rouhani’s second term in office on August 5 was a timely visit for stemming the recent slide in India-Iran relations. Delayed projects and commercial bickering had brought out sharp edges into the bilateral ties that needed to be smoothened through a high level visit.

Gadkari, who has the ministerial responsibility for the Chabahar port project met senior ministers in Tehran and also called on President Rouhani. He reiterated Indian commitment to the Chabahar port and assured the Iranian leaders that the first phase of the project would be completed in 2018. President Rouhani’s inauguration was a glittering event, attended by a large number of senior foreign dignitaries from the region and beyond. The foreign visitors included European Union’s foreign policy chief, Federica Mogherni and China’s head of National Development, He Lifeng, who heads China’s prestigious One Belt, One Road initiative. The presence of the distinguished gathering was evidence of international support to Iran despite US President Donald Trump approving fresh American sanctions on Iranian groups.

The Iranian nuclear agreement that lifted international sanctions on Iran while placing restrictions on Iran’s nuclear programme was signed between Iran and six world powers, namely the US, Britain, France, Russia, China and Germany. Tensions increased between the US and Iran after Trump threatened to walk out of the Iranian nuclear deal and imposed fresh US sanctions against some Iranian entities. But the EU foreign policy chief’s presence indicated continued European support for the nuclear deal.

There have been irritants on both sides in Indo-Iran ties. The Iranians have been irked at the delays on the Chabahar project while New Delhi was miffed at Iran’s Supreme Leader, Ayatollah Khamenei referring to the Kashmir issue in his Eid sermon.

The commercial contract for the Chabahar project was signed with much fanfare during Prime Minister Narendra Modi’s visit to Iran in May 2016. The contract included a specific timeline for the completion of the project. At about the same time, India, Iran and Afghanistan had also signed a trilateral transit agreement. The transit agreement would provide for the transportation of goods from India through Iran’s Chabahar port to Zehedan on the Iran-Afghan border. The expansion of the strategically located Chabahar port is of great importance for India as it would provide much needed access for Indian goods to Afghanistan and then to Central Asia. Though India and Afghanistan have ratified the agreement, Iran is still to complete the process.

Some Iranian reports have argued that the Chabahar process was being delayed as Indian companies were still wary of the possibility of US sanctions. Iranians officials had reportedly claimed that the Chinese and the Pakistani could also be brought into the Chabahar expansion. Just as the Chabahar project created misgivings, the energy sectors in both countries have gone into hard negotiations over the Farzad-B off-shore gas fields. The offshore fields had been discovered by an Indian consortium in 2008, but had languished for years in the face of wide-ranging international sanctions. Iran began looking for competitive bids after the international sanctions were lifted. Indian oil companies have been in negotiation for the development and production of the Farzad B gas field for some time, but Iran rejected the initial Indian proposal last year. The Indian tactics of using the huge Indian oil imports to bargain for concessions on the Farzad B gas project annoyed the Iranians.

Indian oil companies then made a revised offer earlier this year while seeking a guarantee of a reasonable return from the project. But Iran is in no mood to give any concessions. In May this year, Iran signed a basic agreement with Russian gas major, Gazprom for development of Farzad B. In the meantime, Indian oil companies reduced their purchases of Iranian oil by 25 per cent in the current year. Iran retaliated by reducing India’s payment period for oil purchases from 90 days to 60 days and also cut down the freight concessions that had been offered earlier to Indian companies.

India had negotiated favourable terms for its oil purchases when Iran was under economic sanctions. The two countries had agreed on barter trade and part payment in rupees. Indian companies negotiated a concessional price as sanction-afflicted Iran was finding few purchasers for its oil. India and China were among the few countries that continued to purchase Iranian oil on concessional terms during the height of the sanctions regime. However, Iranians have chaffed at being forced to accept very low prices for oil when Iran was under pressure of sanctions.

A renewed commitment to Iran on stepping up the pace on the Chabahar expansion was necessary as India-Iran ties are too important to allow public wrangling to take a toll on bilateral ties.