Corrupt politicians working hand in glove with equally corrupt media is not something new, just watch Sweet Smell of Success that was made in 1957 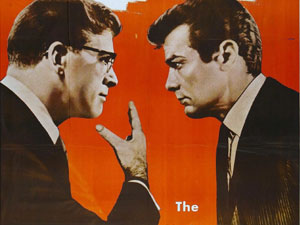 It’s strange how a film from way back in the ’50s reflects on contemporary times. Alexander Mackendrick’s Sweet Smell of Success made in 1957, tells the story of a powerful and vicious Manhattan gossip columnist JJ Hunsecker (played by Burt Lancaster) who uses his power to ruin his sister Susan’s relationship with a young jazz guitarist whom he deems unworthy of her. To achieve this purpose he engages an unscrupulous press agent Sidney Falco (Tony Curtis) who is professionally depended on him. Falco’s failure to make good on his promise to break up the romance earns him the wrath of Hunsecker who stops writing about celebrities whom Falco represents, resulting in Falco’s loss of clientele and money.

Given one last chance by the bullying, intimidating Hunsecker, Falco hatches a scheme to convince another columnist — Hunsecker’s bitter rival — to run a smear item, so that Susan won’t suspect it comes from her brother’s camp. The news involves Dallas (the lovelorn jazz guitarist) who is required to be shown as a dope smoking communist. So that the rival columnist runs the piece in his newspaper, Falco forces a girl whom he had invited over to his flat for carnal rendezvous, to sleep with the columnist. The girl, shocked, resists but is eventually coerced into submission.

The plan works in a way, but Susan refuses to believe in the smear and suspects her brother’s and Falco’s involvement. As a last resort, Falco plants a packet of marijuana in Dallas’s coat while he plays at a club, and very soon he is picked up by a corrupt police officer who has been bribed by Hunsecker. Eventually Susan walks out on her brother and Falco is ruined when he is also picked up by the corrupt police officer on the orders of Hunsecker.

Sweet Smell of Success is a relentless tale of greed and moral corruption where the influential don’t hesitate to use their power to prey on innocent people and destroy careers to achieve their selfish needs. The audiences at that time drew parallels between Hunsecker’s character and a powerful columnist Walter Winchell who did very much the same thing by using his columns to attack a man who wanted to marry his daughter, Walda.

The film manages to ruthlessly examine the power of press and its manipulative ways; that is where the film draws its contemporary relevance; especially in this age of electronic media where most news channels bark out their agenda with a primeval vehemence and bay for the blood of those who do not tow the ideological line of the ruling party. A satellite television channel’s hounding of Congress politician Shashi Tharoor for his alleged involvement in the death of his wife few years ago is the most recent example of media following a personal agenda on the behest of its political masters who hold the purse strings.

In the film, Susan’s guitar-playing boyfriend is branded as a commie, reflecting the United State’s pathological abhorrence for communist ideology which it always viewed as a threat to its society reared on ruthless capitalist enterprises. The attitude is not much different from today’s India where suddenly all leftist intellectuals — and even those you are not — are perceived as security threats and conveniently clubbed with Maoists and branded as libtards and sickularists — or that convenient catchword: anti-national.

The latest to face the wrath of members of the ruling party is the ex-vice president of India, Hamid Ansari for his critique of the current state of affairs. And to help them in this agenda, the ruling party finds a kindred soul in most television channels that are ever-willing to bend and propagate falsities on a daily basis.

A lot of influential journalists have been known to wield political clout and resort to blackmailing tactics, but never before this unholy nexus between media and politicians been more acute than it is in today’s times.

The only difference is that in the film, media is shown wielding its power not only over innocent people, but also politicians; whereas in today’s times, it is the powers-that-be who are calling the shots through a subservient electronic media which is ever-ready to crawl to do its masters’ bidding.

(Ranjan Das is a Mumbai-based filmmaker, instructor and writer)