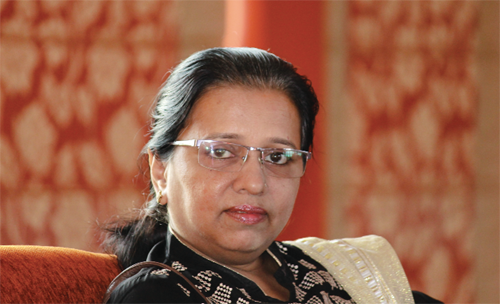 PE multiple is getting adjusted to interest rates

Higher crude prices put pressure on the rupee as our import requirements rise and the weak currency affects the fiscal health. For attracting more foreign funds to capital markets, the fiscal deficit needs to be in control, said Anita Gandhi, whole-time director and head of institutional business at Arihant Capital Markets, in an interview with Ravi Ranjan Prasad. At the same time, more resources need to be made available for development and growth of the economy, Gandhi added. Excerpts:

What’s your take on second quarter performance so far?

Q2 performance has been quite satisfactory. For the banking sector it turned out to be mixed bag. Banks having exposure to IL& FS saw some dent in profitability owing to higher provisioning requirement. The auto sector saw some margin pressure due to hike in metal prices. The cement sector also saw some pressure due to higher fuel and transportation costs. It was good quarter for the technology sector due to weak rupee during the quarter and stability in the BFSI segment in the US and Europe to which these companies provide services. The pharma sector also saw some improvement in overall profitability of companies.

Crude oil and rupee are receding from their recent highs and lows, respectively. Do you see end of the pain for the market?

Crude oil prices as well as the rupee play very vital role in macro health of our economy. Higher crude prices put pressure on the rupee as our import requirements go up and the weak currency affects the fiscal health. For attracting more foreign funds to capital markets, the fiscal deficit needs to be in control. At the same time, more resources need to be made available for development and growth of the economy.

But it’s difficult to say that crude prices have topped out. The overall demand supply scenario suggests they may not rise substantially from the current levels. If crude prices remain under control, we may see rupee stabilising and if crude prices fall further, we may see the rupee appreciating. Over all in near-term the rupee seems to remain in the range of 73/73.50 per dollar

The US-China trade war has been interpreted as a boon for the Indian economy?

The trade war is a big subject. It’s difficult to summarise its impact in few words. The impact may be long lasting and can have big impact on international trade. But China has been one big competition for India due to its scale and size. Thus, loss of China can be benefit to India wherever those trade synergies match and Indian products are equally competitive.

Will the equity market continue to see volatility on global and domestic cues?

The recent high volatility was because of sudden liquidity crunch caused by IL&FS default and its impact on NBFCs. During the same time, our macros suffered due to weak rupee and higher crude prices along with rising yields. When interest rates start moving up, the equity market PE multiple starts getting adjusted to it. Higher interest rates lead to lower growth and justifies lower PE multiple. Our markets enjoyed quite high valuations in recent past as interest rates were earlier lower and liquidity was robust. The overall PE multiple is now getting adjusted to interest rates. We will see stability coming back to the market, if oil and the rupee start stabilising.

What’s the road ahead for th?o?se who have invested in NBFCs?

NBFCs primarily have small ticket size and it lends to SMEs and individuals/small entrepreneurs. Interest rates charged by NBFCs are generally higher but at the same time it covers that segment of society, which finds it difficult to avail credit from banks. After demonetisation, many small businesses, individual entrepreneur’s businesses suffered. But lending from NBFCs helped them revive business. Credit offtake of these NBFCs improved substantially after demonetisation and most NBFCs enjoyed robust credit growth in 2017-18. These NBFCs in turn were raising money through banks, NCDs and CPs at competitive rates. Money circulation in the overall system was smooth. The trouble started when some housing finance company faced asset liability mismatch and was unable to roll its CP and IL&FS defaulted on its interest payment in July. This resulted in sudden liquidity crisis, impacting fund raising by NBFCs as well. The problem emerged from default of behemoth like IL&FS in payment of interest that ran a large loan book. This event had put break in the smooth financial flows in the system and eventually affected NBFCs, which till then enjoyed higher valuations owing to robust growth. Banks stopped lending to NBFCs and that resulted into slowing of lending by them. Since credit growth got impacted, higher valuations were not justified and all NBFCs got corrected. This correction will give opportunity to the investor to invest in NBFCs with strong balance sheet at little reasonable valuations. For those who have invested at high levels may have to wait for the gr?owth to come back. NBFCs play vital role in the job creation in the economy, especially in micro and small enterprises. It contributes to 25-30 per cent of jobs in the economy. Thus, it remains important segment of the economy and needs to be supported by the government to create more jobs.

Small- and mid-caps have seen some recovery. Are they good for taking an investment call?

One has to be company specific in this space. Also one needs to see that the debt equity ratio of these firms is in control. Many mid- and small-cap firms are still required to improve their corporate governance. Thus, firms wi?th good corporate governance and quality management can be considered for investment.

What events, besides assembly polls, would have an impact on the market before the year ends?

Trade wars, new scenario in the US House, RBI policy and its stance on interest rates, monthly auto sales, manufacturing PMI and creation of jobs, domestically, will impact the market.

With more equity participation coming through SIPs, India’s retail investor base is widening. Also this money comes in tranches allowing investor to average investments at various levels, enhancing possibility of earning money on the longer term basis. Power of retail money is very strong. It has allows sufficient liquidity and balancing to the market when foreign investors were selling. Investments coming through SIPs don’t put any pressure on investor as it comes more as steady investment and not as one-off or trading bet. The recent corrections in the market are more due to worsening macro-economic factors or geo-political reasons. Investors are mature now as there is sufficient information and research available along with investment options.