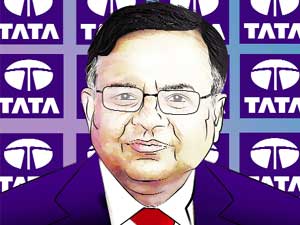 Chandra is Bombay House boss
Over two months after the ouster of Cyrus Mistry, $103-billion Tata group on Thursday named TCS chief N Chandrasekaran as the new chairman of Tata Sons, the holding company of the salt-to-software conglomerate. Chandrasekaran is the first non-Parsi chairman of Tata Sons.
Chandrasekaran, popular as Chandra, will take the reins of Tata Sons at Bombay House headquarters from February 21.
On being appointed head of the country’s one of the most influential corporates, Chandrasekaran said he was proud to have been part of the Tata family for over 30 years and assuming this position was a great privilege. He thanked Tata Sons board and Ratan Tata for their confidence in him.
“The board of directors of Tata Sons in its meeting on Thursday appointed N Chandrasekaran as executive chairman. This is as per the unanimous recommendation of the selection committee,” the company said in a statement.
Chandrasekaran said he would reach out to all, as he needed everybody’s support to lead the group. “Tatas ethics and values are of highest importance. I will reach out to everyone.”
“They have had phenomenal leaders who have contributed to making the group what it is today. While I feel very honoured, I also feel overwhelmed because I don’t think anyone can easily get into this job. This position requires several leadership qualities and compassion and I feel I will grow into this role over a period of time,” he said.
Keeping in mind apparently the public spat that followed the sacking of Mistry, Chandrasekaran said his responsibility requires binding the group together.
The responsibility, he said, requires “binding the group together (and its) the three-tier structure” with the “phenomenal” work that Tata Trusts — the majority holders of Tata Sons — has done very silently over a century in contributing to the society.
Interestingly, his predecessor Mistry was sacked for “growing and untenable trust deficit between Tata Sons and the Tata Trusts.”
The chairman-designate said his aim would be to help progress the conglomerate “with the ethos, ethics and values that the Tata group has been built on”. “At the Tata group, we are at an inflection point. I am aware that this role comes with huge responsibilities.
Industry captains hailed the appointment of Chandrasekaran saying his leadership was exceptional and extraordinary. Infosys co-founder N Narayana Murthy said his performance was on the table for everyone to see.
“Chandra is a tall leader of the Indian IT industry with a spectacular record. His leadership qualities are legendary,” Murthy said.
In a surprise move, Tata Sons board on October 24 ousted Mistry and appointed the group patriarch Ratan Tata as interim chairman. The board tasked a five-member committee to select a new chairman within four months. Apart from Ratan Tata, the other members of the search panel included TVS Group head Venu Srinivasan, Amit Chandra of Bain Capital, former diplomat Ronen Sen and Lord Kumar Bhattacharya.
The appointment of Chandrasekaran came amid a bitter boardroom battle between Tatas and Mistry. Tata Sons is engaged in a bitter court battle with Cyrus Mistry whose family-promoted firm holds 18.4 per cent stake in the holding company. Various Tata Trusts hold over 66 per cent in Tata Sons. Mistry has challenged his sacking in the National Company Law Tribunal (NCLT).
On Wednesday, two of the Mistry family-owned two investment firms filed a contempt application at NCLT against move by Tata Sons to remove him as director and sought an order to restrain the company from going ahead with its planned EGM on February 6 called to remove him.
Cyrus Mistry’s office could not be reached for comment on Chandrasekaran’s appointment. end-of
Tags:
news
Latest From Markets