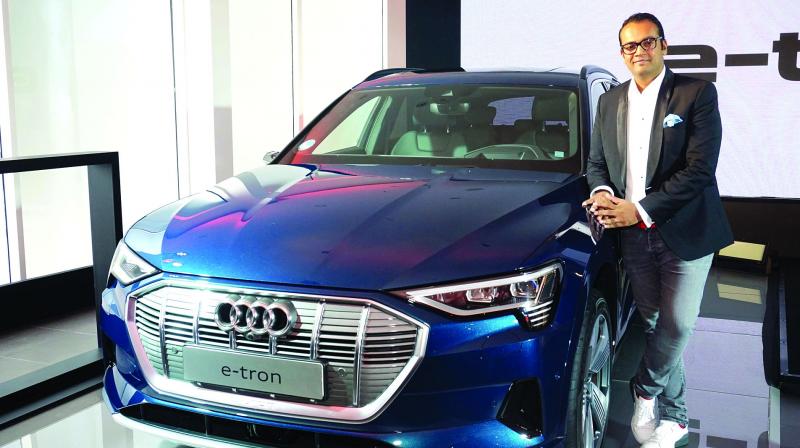 The Mumbai-headquartered German auto maker showcased its first fully electric SUV Audi e-Tron for the Indian market where it competes with arch-rival Mercedes-Benz, BMW, Jaguar Land Rover, Volvo and Lexus. “India is one of the big markets and growing. With the government’s push for electric vehicles, we have lined up a slew of 30 electric cars for the Indian market,” Rahil Ansari, head at Audi India told Financial Chronicle.

Out of the 30 models, 12 would be fully electric-powered, while the rest would be hybrid models, he said.“Our first fully electric SUV the Audi e-Tron will be launched in India by the end of this year,” Ansari said, adding that it was preparing the charging stations road map across the four metros and other cities before the launch.

Audi e-Tron is powered by two motors. The 125 kW motor is positioned at the front while the 140 kW motor is at the rear, together offering an all-wheel drive system with power and torque figures at 408 hp and 664 Nm respectively.

The Audi E-Tron claims acceleration from 0 to 100 kmph in 5.5 seconds with a top speed of 200 kmph. The battery pack can be charged via a regenerative braking technology and a wall charge, and 80 per cent charging is accomplished in 30 minutes through a DC fast charger or via a home AC charger with 230V or 400V capacity.

While the Audi e-Tron will face no real competition in India, in global markets it competes against the Jaguar i-Pace, Tesla Model X and the Mercedes-Benz EQC.

The Audi e-Tron SUV is now available for display at the company’s new Audi Gurugram showroom, with space to display 21 Audi cars.

“New Delhi region is the biggest market for luxury cars and this new showroom is significant for us,” Ansari said.