Maruti may operate just one shift at factories. 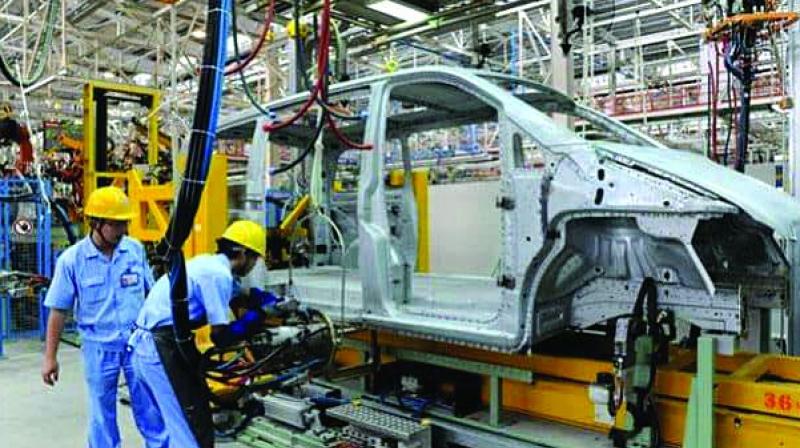 Maruti Suzuki, India’s biggest car maker, is also likely to cut down production and operate just one shift at all its factories, with demand for car slumping to a decade low and causing inventory to bloat.

PUNE: With the automobile industry slipping into a gorge with no visible sign of revival in the near future, Tata Motors, India’s top automaker by revenue, and Mahindra and Mahindra (M&M), the country’s largest utility vehicle maker, have decided to cut production at some of their plants.

Maruti Suzuki, India’s biggest car maker, is also likely to cut down production and operate just one shift at all its factories, with demand for car slumping to a decade low and causing inventory to bloat.

Other automakers are likely to follow suit, which would lead to loss of at least contractual jobs.

Tata Motors, which had previously flagged a challenging external environment, said it closed
some blocks at its Pune plant in Maharashtra.
Last month the Mumbai-headquartered company, which owns British luxury car brand Jaguar Land Rover, had posted a bigger-than-expected quarterly loss due to weak conditions at home and problems at its British luxury car unit.

M&M said its automotive segment, which makes passenger and commercial vehicles and spare parts, would cut production for 8-14 days at various plants during the second quarter.

Maruti Suzuki, which sells one out of two cars bought in the country, will slash one shift at its Manesar factory, industry sources said, adding that the company’s Gurugram and Gujarat plants were already operating below their capacity.

“The 200,000 job cuts in the June quarter are over and above the 32,000 people who lost employment when 286 showrooms were closed across 271 cities in the 18-months period ended April this year,” FADA President Ashish Kale told Financial Chronicle.

He said job cuts may continue with closure of more showrooms across the country as slowdown has impacted all auto brands, including luxury brands.

Kale said government must intervene with a slew of incentives to arrest this livelihood threatening trend.

Industry experts said due to the high capital cost of selling vehicles along with rising inventory, hundreds of dealerships went out of business, laying off jobs.

The crisis has also hit smaller auto parts makers like Jamna Auto Industries. The company, whose customers include Tata Motors, General Motors Co and Toyota Motor Corp, said it might shut all its nine plants this month over weak demand.