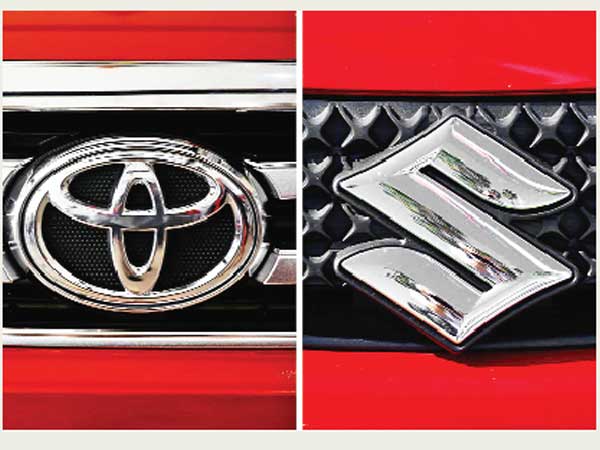 Toyota, Suzuki to produce cars for each other in India

Toyota Motor Corp and Suzuki Motor Corp agreed on Thursday to produce cars for each other in India as Toyota aims to increase its market share in the world’s fifth-largest passenger car market.

The agreement follows an R&D tie-up announced by the two Japanese automakers a year ago, and will see Toyota, one of the world’s biggest automakers, secure production from its much smaller rival, which dominates India with its line-up of affordable compact cars.

Suzuki will supply gasoline and mild-gasoline hybrid versions of its Baleno hatchback, along with the Vitara Brezza compact SUV to Toyota while the latter will produce gasoline and gasoline-hybrid Corolla sedans for Suzuki, the automakers said.

Analysts said the arrangement would help Toyota expand its presence in India, where it has struggled to grow sales due to lean demand for its lower-cost models.

“By selling rebadged and slightly changed Balenos and Vitaras, Toyota can bolster its distribution network and move more towards expanding its market share.”

Manufacturing will begin by mid-2019. Under the deal, vehicles made by Suzuki will be rebranded and renamed as Toyota cars, while the Toyota vehicles will sport the Suzuki badge.

A Toyota spokeswoman declined to give details on production figures, while the Nikkei business daily reported that Toyota would supply around 10,000 vehicles to Suzuki, while Suzuki would produce up to 50,000 units annually for Toyota.
The deepening partnership between the two automakers will enable Suzuki to tap into Toyota’s R&D firepower to develop lower-emission vehicles and self-driving cars — areas which Suzuki has admitted it is struggling to keep up with. The two firms plan to introduce electric cars in India around 2020.

Suzuki has dominated the Indian automobile market through a majority stake in Maruti Suzuki India, the country’s largest automaker, which sold roughly 1.6 million vehicles last year, accounting for every other car sold in the country. Producing 50,000 vehicles for Toyota would represent just a sliver of what Suzuki sold in India in 2017.

Toyota lags far behind wi?th a roughly 5 per cent mark?et share. An additional 50,000 units could push Toyota’s annual sales above those of Honda Motor and Tata Motors, but it will still lag far behind the top three manufacturers — Suzuki, Hyundai Motor Co and Mahindra & Mahindra.

Last year, Toyota sold rou?ghly 140,000 cars in India, leaving its two plants in the country to operate at about half their capacity of manufacturing over 300,000 vehicles a year.

Toyota has produced cars specifically for the Indian market for 20 years, but sal?es have been dented by poor demand of its last two no-frills models made specifically for India, the Etios sedan and the Liva hatchback, which were criticised for compromising on quality and finish to keep costs low.

The supply from Suzuki would alleviate pressure on Toyota to develop its own low -cost models for the country under its Daihatsu compact car brand, which has made limited progress in developing affordable, appealing mo?dels for emerging mark?ets. In the past, Toyota had looked to Daihatsu for help to develop affordable, competitive cars in India. But its engineers and parts purch?a?s?ing managers have told Re?u?ters that establishing supply chains from scratch that can compete with Suzuki’s would be time-consuming.