Meeting stringent environment norms such as not producing petroleum coke, and relocation of the plant has jacked up the cost. 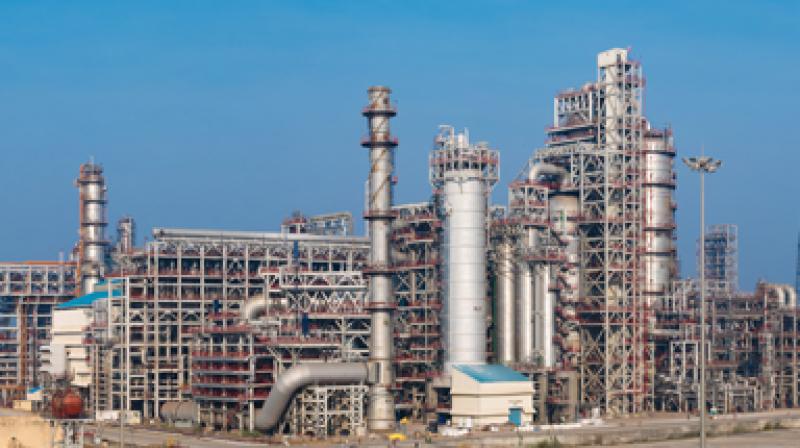 Supreme Court has mandated that you cannot sell petroleum coke and so to produce fuel without any such residue requires the use of best in class technology and will cost more, an official said. (Photo: Representational)

New Delhi: India is looking at cutting capacity at its biggest oil refinery to match lower fuel demand projections and contain costs which jumped to USD 60 billion due to meeting stringent environment norms and relocation of the plant, top officials said.

"Supreme Court has mandated that you cannot sell petroleum coke and so to produce fuel without any such residue requires the use of best in class technology and will cost more," an official said.

Also, the unit will now be set up in Raigad district as land acquisition at a previous site in Ratnagiri district was stalled due to farmer protests.

"Land acquisition is a small cost in the project of such size. To say that the project cost has increased by USD 16 billion or Rs 1.12 lakh crore just because the site was relocated is absurd," he said. "We would have paid some money for purchasing land at Ratnagiri. We would pay for land at Raigad too, which can be higher or lower, I don't know. It can be slightly more than Ratnagiri but it certainly cannot be over Rs 1 lakh crore more."

Maharashtra government will decide on the price of the land, he said.

The consortium has engaged Engineers India Ltd (EIL) to do a cost study which should be out by next month, another official said.

Also, a detailed feasibility report (DFR) is being prepared that will detail the cost. Simultaneously, demand assessment is being done keeping in mind the government push for moving away from petrol/diesel driven vehicles and adopting electric vehicles (EVs).

The two will be married to arrive at an optimal refinery configuration, he said adding that the preliminary cost estimate going up to as much as USD 60 billion from USD 44 billion previously was primarily due to producing fuel meeting the stringent environment norms including those set by the Supreme Court.

The refinery configuration would also depend on financing power of the companies involved.

The three PSU firms can put in Rs 30,000 crore to Rs 40,000 crore as equity and equivalent money would come from Saudi Aramco and ADNOC as they own 50 per cent of the project. But the rest of the money will have to be financed from domestic sources or raised internationally, the official said.

"The final call will have to be taken by the government. Can banks finance about Rs 3.5 lakh crore in just one project?" he said.

The project, he said, will have to be approved by the Cabinet and it will have to take a call on how much financing can be put in one project.

Another official said the DFR, which will include the type of products the refinery will produce, will not be ready before 2021 and it would take 4-5 years to build the project from thereon.

Initially, the refinery was considered to include three crude units of 20 million tonnes each that could produce petrol, diesel, LPG, aviation turbine fuel (ATF) and feedstock for making petrochemicals such as plastics, chemicals, and textiles.

While the project will give IOC a strong foothold in western states as catering to customers in the west and the south is difficult with its refineries located mostly in the north, for HPCL and BPCL this will increase their capacity as their Mumbai refineries cannot be expanded further.

Currently, the country has a refining capacity of a little over 232 million tonnes, against the domestic demand of 194.2 million tonnes in fiscal 2017. According to the International Energy Agency, this demand is expected to reach 458 million tonnes by 2040.

The country is the world's third-biggest oil importer. But the fuel demand is slowing due to a slowdown in the economy as well as a shift towards EVs.

Saudi's interest in the project can be seen as securing its future with a large customer as India has been moving away from Saudi to other markets like Africa, Latin America, and even the US.