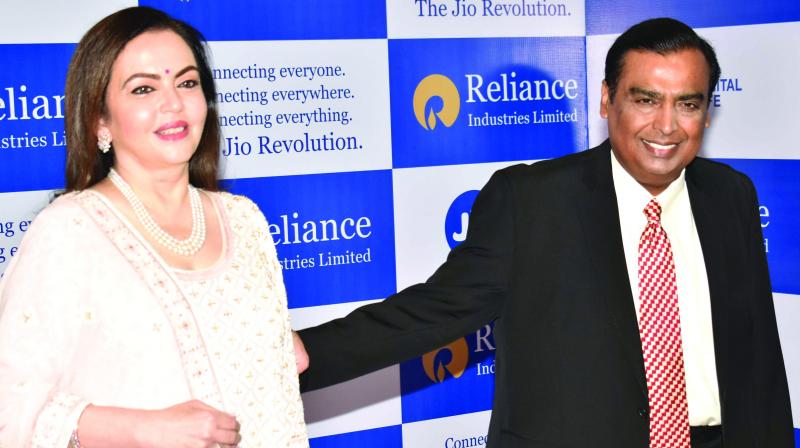 Reliance Industries will become a net zero-debt company in the next 18 months, by March 31, 2021, said Mukesh Ambani, Chairman, RIL addressing the shareholders.

Mumbai: Reliance Industries (RIL) on Monday announced sales of a 20 per cent stake in its oil to chemicals (O2C) division to Saudi Aramco for $15 billion and a 49 per cent stake in its petrol retail business to BP for Rs 7,000 crore. Announcing the deals at its 42nd annual general meeting (AGM) here, RIL said it plans to reduce a part of its over Rs 2.8 lakh crore debt by over Rs 1.15 lakh crore.

The 20 per cent stake sale values the O2C division at $75 billion.

The company will also roll out fibre-based fixed-line broadband services from September 5, offering an internet speed of at least 100 mbps, free voice calls for life, television and video streaming on HD sets given for free along with the connection that would come for as low as Rs 700 per month. (See: Technomics)

Announcing its largest ever, $15-billion deal, RIL said, “Saudi Aramco and Reliance Industries have agreed to a non-binding Letter of Intent regarding a proposed investment in the Oil to Chemicals division comprising the refining, petrochemicals and fuels marketing businesses of RIL.”

“The parties will make an announcement once a definitive agreement is executed,” RIL said.

Reliance Industries will become a net zero-debt company in the next 18 months, by March 31, 2021, said Mukesh Ambani, Chairman, RIL addressing the shareholders.

Ambani also said that investment cycle of Jio, the telecom arm of RIL was complete.

“Saudi Aramco’s potential 20 per cent stake is based upon an enterprise value of USD 75 billion for the O2C division. This would be one of the largest foreign investments ever made in India,” RIL said.

Saudi Aramco is the world’s largest and lowest cost-per-barrel producer of crude oil, is geographically close to India, and offers a wide range of crude supply options. Saudi Aramco and RIL have a long-standing crude oil supply relationship of over 25 years.

“The proposed investment would result in Saudi Aramco supplying 500 KBPD of Arabian crude oil to the Jamnagar refinery on a long term basis,” RIL said.

Market participants expects the shares of RIL to gain four to five per cent when market opens on Tuesday. RIL's global depository receipts (GDS) listed on the London Stock Exchange were up over 6 per cent.

“This is inarguably India's largest-ever FDI inflow and would help dissipate the gloomy sentiment currently pervading in the economy and stock markets. This programme to aggressively pursue deleveraging in businesses such as O2C, fibre & tower and emerge as a zero debt company in the next 18 months will strengthen the consolidated balance-sheet, leading to strong valuation re-rating of the stock,” Bodke said.

RIL would get Rs 7,000 crore from the deal with British multinational oil & gas company BP plc.

Mahesh Singhi, Founder & MD, Singhi Advisors, said, "The sale of key energy assets is expected to help the oil-to-telecom conglomerate to offset the headwinds it has been facing in its core petrochemicals business vertical owing to soft refining margins. India’s largest private sector player has an outstanding debt of Rs 2,87, 505 crore and the raised capital is expected to deleverage the company to a significant extent and realise the objective of making the company a zero-debt entity within 18 months."

"The capital raised from the stake sale in its oil refining and chemicals business and fuel retail business is likely to be used by the company to consolidate its hold over the booming telecom sector through measures like the commercial roll-out of its broadband service Jio Fiber,” Singhi said.

Ambani also highlighted the growth in retail and telecom businesses, which, according to him, would be among the top 10 businesses in the country had they been listed. RIL plans to list Jio and the retail businesses in the next five years.

From September 5, 2019, Jio will launch broadband services called "Jiofibre" on a commercial basis.

Ambani spoke at length how through Jiofibre people will be able to watch movies on the release day itself sitting at home. "Skeptics used to say that Reliance cannot succeed in consumer businesses. Jio and Reliance Retail have proved them wrong," Ambani said.

On the current slowdown in the economy, Ambani said, "The slowdown in some sectors of the economy is temporary. The fundamentals of the Indian economy are very strong. The opportunities will grow further with structural reforms."

"I can clearly see India becoming a $10 trillion economy by 2030," Ambani added.