After gobbling down a free breakfast, she dons a checked white hat, apron-shirt, static-resistant footwear and tiny finger gloves. 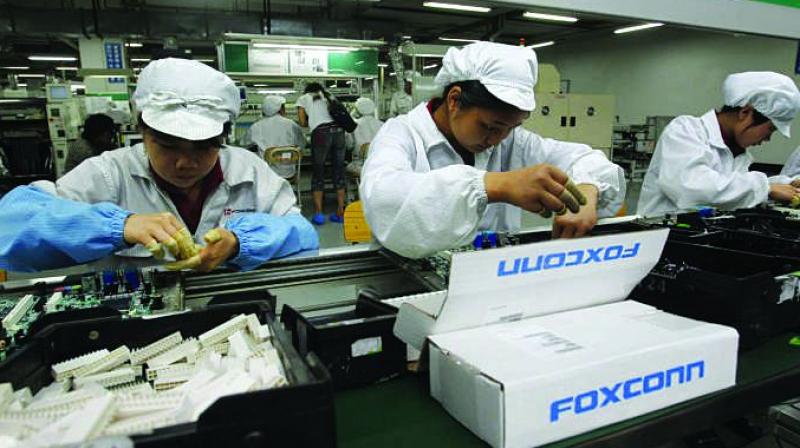 Foxconn, also known as Hon Hai Precision Industry Co, opened its first India factory four years ago. It now operates two assembly plants, with plans to expand those and open two more. India has become an important manufacturing base as the Taipei-based company looks to diversify its operations beyond China.

Bengaluru: On a steamy summer morning, dozens of buses pull up outside a cluster of low-slung, blue buildings in Andhra Pradesh. Women dressed in colorful salwar kameezes disembark, their dupatta body scarves billowing as they make their way past hibiscus bushes and posters proclaiming, "Our aim, no accident."

The night shift at Foxconn Technology Group's mobile phone plant in Sri City is ending, and thousands of young women are punching out as others stream in to replace them. One of the arrivals is Jennifer Jayadas, a tall, slim 21-year-old who lives several miles away in a two-room hut with no running water.

After gobbling down a free breakfast, she dons a checked white hat, apron-shirt, static-resistant footwear and tiny finger gloves. Then Jayadas takes her place at a testing station where she will spend the next eight hours making sure the volume, vibration and other phone features work properly. "Smartphones used to be all made in China," she says. "Now, we make them here."

Foxconn, also known as Hon Hai Precision Industry Co, opened its first India factory four years ago. It now operates two assembly plants, with plans to expand those and open two more. India has become an important manufacturing base as the Taipei-based company looks to diversify its operations beyond China.

Succeeding in India has become all the more urgent since US President Donald Trump launched a trade war last year and announced tariffs on thousands of products manufactured in China, including the gadgetry Foxconn makes for Apple, Amazon.com and others.

"It's a good business principle not to put all your eggs in a single basket," says Josh Foulger, who runs Foxconn's India operations. "We have to find viable and reliable alternatives. Obviously the alternative location has to be competitive. We can't put a factory in Mexico for manufacturing mobiles. It might have worked 10 years ago, it just won't work today."

Foulger, 48, grew up in Chennai and attended the University of Texas in Arlington, before returning to India in the mid-aughts to set up manufacturing for Nokia. He joined Foxconn four years ago to help founder Terry Gou establish assembly plants in India, now the world's fastest-growing smartphone market.

Foxconn's first India facility started in 2015 in Sri City, a special economic zone where foreign companies make everything from diapers to train carriages. Foxconn's plant employs almost 15,000 workers-about 90 per cent of them women — and assembles phones for various manufacturers, including local best-seller Xiaomi. In recent months, workers began testing and assembling Apple's iPhone X, which will be sold in India first and eventually exported.

A second mobile phone factory opened in 2017 in Sriperumbudur, about two hours by road from the first facility. It employs 12,000 and is partially automated. "By 2023," Foulger says, "both factories will be much larger and we'll add two more locations."
Foxconn currently ships parts in from China, but hopes one day to manufacture displays and printed circuit boards locally. Foulger is angling to capture a third of the domestic smartphone market and 10 per cent of the global one (up from a 2.5 per cent share today). Eventually, he plans to add other products, including Amazon Echo speakers, to the mix. "Until now, India has made for India," he says. "Soon India will make for the world."

Prime Minister Narendra Modi's four-year-old "Make in India" policy seeks to turn the country into a manufacturing power by offering incentives to foreign companies to open factories. "The plan is to expand India's $25 billion phone manufacturing to $400 billion by 2024," says Pankaj Mahindroo, who heads the Indian Cellular & Electronics Association. "A substantial portion
of it will be for the export market.

There's a long way to go: A mere 7,00,000 electronics manufacturing jobs have been created since Make in India started, according to Mahindroo's industry group. Skilled workers such as industrial designers are in short supply, and there isn't yet much of a supplier network providing crucial components such as batteries, semiconductors and processors. "India is not there yet," says Anshul Gupta, a Senior Research Director at Gartner India. "But things are beginning to fall in place. India can bolster its manufacturing capacity and help the world cut its reliance on China."

Foxconn was integral to China's transformation into a manufacturing colossus. But it took China 30 years to get there. "China's advantage was its massive labour pool that could produce quite cheaply, and they built on that by investing heavily in logistics and transportation," says Andrew Polk, a Founding Partner with Trivium China, a Beijing-based research firm. "Even as their labour pool advantage is dissipating, they have invested in processes and systems so they can produce efficiently at scale and get the goods to the market."

Catching up will require the Indian government and private sector to invest heavily in roads, rails, ports and other infrastructure. "When China did it, global supply chains were fragmented and there wasn't another China," Polk says. "India will not only have to get it right but they have to get it right in a way to better China, and trade wars can only help at the margins." China also had the benefit of being able to grow without worrying too much about the environmental impact. With concern about climate change growing, "that's not going to fly these days," he says.