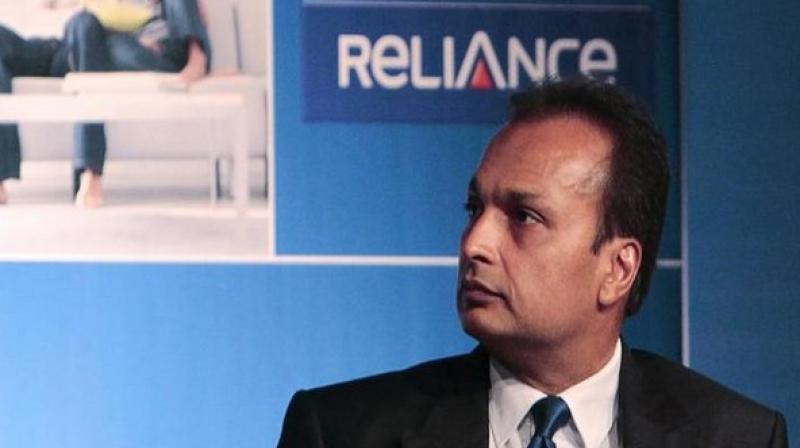 The company has made interest and principal repayments of Rs 72.65 crore on a range of instruments including non-convertible debentures. (Photo: ANI)

Mumbai: Shares of Anil Ambani-led Reliance Capital touched a 52-week low of Rs 26.75 on Monday, declining 4.46 per cent during early hours after the company concluded the sale of its stake in Reliance Nippon Life Asset Management (RNAM).

Meanwhile, a Reliance Capital spokesperson said the company has made interest and principal repayments of Rs 72.65 crore on a range of instruments including non-convertible debentures, term loans and inter-corporate deposits.

"The company is current on all its repayment obligations," the spokesperson said.

In February, Reliance Capital had invited Nippon Life Insurance Company to acquire up to 42.88 per cent stake that it holds in RNAM. It first sold 17.06 per cent of its shareholding in three successive past offers for sale totalling more than Rs 2,480 crore.

Later, it offloaded 21.54 per cent stake for Rs 3,030 crore. Reliance Capital will further monetise its balance 4.28 per cent stake worth about Rs 700 crore.

On Saturday, the company said it has concluded transaction with Nippon Life Insurance Company of Japan to sell its stake in Reliance Nippon Life Asset Management (RNAM).

"Reliance Capital has received proceeds of about Rs 5,500 crore (785 million dollars) through sale of its shareholding to Nippon Life Insurance Company and through offers for sale," it said in a statement, adding the deal is among the largest in India's financial services sector.

The entire RNAM stake monetisation proceeds will be utilised to reduce Reliance Capital's outstanding debt. The company expects to reduce its debt by at least Rs 12,000 crore (or 70 per cent) in the current financial year.

Reliance Capital, a part of the Reliance Group, is one of India's largest financial services conglomerates in the country with nearly Rs 90,000 crore of assets, Rs 8,000 crore of net worth and over 18,000 employees.