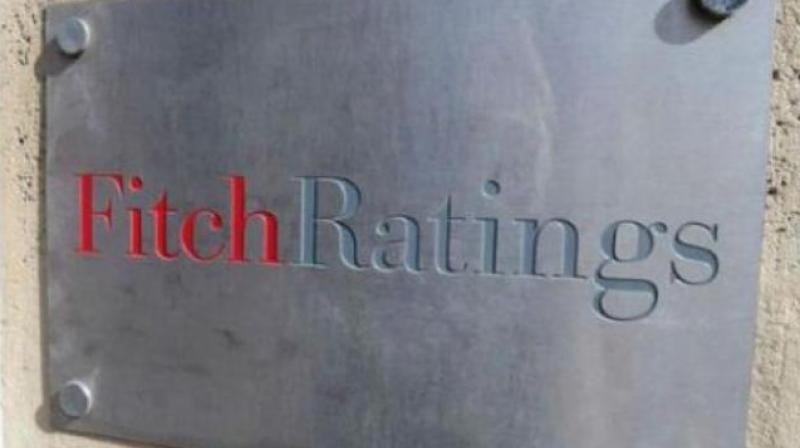 "We at Fitch Solutions believe that growth has likely bottomed out and will start to rebound over the coming quarters. However, noting ongoing pressure on the external sector and private consumption, we now expect this rebound to be weaker than before," the rating agency said in its comments on India's growth.

New Delhi: After slumping to an over six-year low, India's economic growth will pick up over the coming quarters but the rebound is expected to be weaker than before, Fitch Solutions said on Monday as it trimmed GDP forecast for the current fiscal to 6.4 per cent from 6.8 per cent previously.

"We at Fitch Solutions believe that growth has likely bottomed out and will start to rebound over the coming quarters. However, noting ongoing pressure on the external sector and private consumption, we now expect this rebound to be weaker than before," the rating agency said in its comments on India's growth.

The combination of fiscal and monetary stimulus, continued reform momentum, and favourable base effects would lead to a rebound in growth, it said.

"While we at Fitch Solutions continue to forecast growth to pick up over the coming quarters supported by reforms, fiscal stimulus, and favourable base effects, we now expect the rebound to be weaker than before, given a subdued external and private consumption outlook," it said.

Fitch Solutions said it was revising its growth forecast to 6.4 per cent in FY2019/20, down from 6.8 per cent previously.

"In our view, the FY2019/20 full-year Union budget in July and the government's fiscal stimulus package announced on August 23 fall slightly short in their effort to boost growth significantly.

"However, we remain optimistic that further announcements related to fiscal support over the coming months could offer more effective measures to shore up growth, particularly given the government's windfall from the RBI's annual dividend," it siad.

Also, reforms are expected to continue being an important factor driving growth over the longer term.

"The government's announced measures so far have struck us as insufficient to lift growth or sentiment. While we remain optimistic that more effective measures could be announced over the coming months, there remains the risk that this does not materialise.

"Moreover, even if more effective measures do come through, it would also take some time to feed through the economy, with the lift to headline growth possibly only manifesting in FY2020/21," it said.

Moreover, the government's ongoing support measures would likely be insufficient to fully offset the impact from a more pronounced global slowdown, should the US-China trade war escalate more aggressively.

"We expect private consumption, investment, and exports growth to remain under pressure over the coming quarters," it said. "Poor growing weather during the kharif season will likely impact farm incomes, which will weigh heavily on private consumption in rural areas, which is where more than 60 per cent of the population live."

Separately, job losses across key sectors of employment such as manufacturing and construction will also see consumers tighten their purse strings.

Fitch said weakness in the manufacturing sector, which saw growth slow to 0.6 per cent in April-June from 3.1 per cent in the preceding quarter on the back of weakening automobile industry, will likely result in further layoffs over the coming months.

A slump in automobile sales, which has posted nine straight months of contractions, has already resulted in the closure of nearly 300 dealerships and has caused the loss of around 200,000 jobs.

Similarly, a slowdown in the construction sector, which saw growth slow to 5.7 per cent from 7.1 per cent will likely entail job losses, which could be severe given that the sector provides the largest number of jobs, providing employment to more than 52 million workers.

"A poor consumption outlook is likely to result in businesses holding back on their investment plans. Additionally, despite possible supply chain relocation out of China providing some support to India's exports outlook, slowing global demand exacerbated by the ongoing US-China trade war will likely cap near-term growth prospects in this component," it said.

Despite the growth pressures, monetary easing by the central bank is likely to still provide some support to consumption and investment activity over the coming quarters, it said adding the Reserve Bank of India (RBI) has already eased its policy interest rates by 110 basis points (bps) since January from 6.50 per cent to 5.40 per cent and it is expected that it may ease it further by 40 bps to 5 per cent by end-March 2020.

According to the RBI, the 75 bps worth of cuts prior to its 35 bps cut in August has only resulted in a 29 bps reduction in the weighted average lending rate on new Indian rupee loans, which continues to reflect challenges in monetary policy transmission.

Nonetheless, some banks in India have adopted the RBI's suggestion to link their new loan products to the RBI repurchase rate which should improve the transmission mechanism, Fitch said, adding lower borrowing costs should stimulate lending activity, which bodes well for a rebound in private consumption and investment growth.