GDP growth slowed sharply to a pace of 4.5 per cent in the July-September, hit by a slump in manufacturing output. 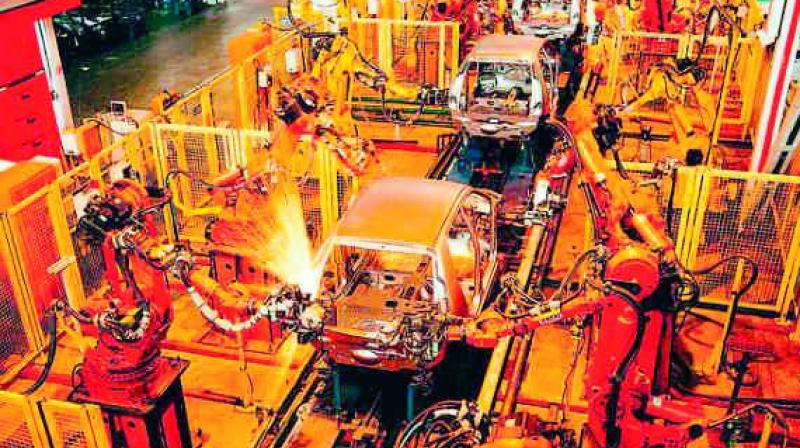 This is the 28th consecutive month that the manufacturing PMI has remained above the 50-point mark.

New Delhi: The country's manufacturing sector activity inched up in November, but the upturn remained subdued as growth rates for new orders as well as production were modest, a monthly survey said on Monday.

The IHS Markit India Manufacturing PMI rose to 51.2 in November from 50.6 in October, when it had fallen to a two-year low, indicating only a slight improvement in the health of the sector.

Although business conditions in the Indian manufacturing sector improved in November, the rise, however, remained subdued compared to earlier this year and the survey history, the study said.

This is the 28th consecutive month that the manufacturing PMI has remained above the 50-point mark. In PMI parlance, a print above 50 means expansion, while a score below that denotes contraction.

"After pulling back noticeably in October, manufacturing sector growth displayed a welcoming acceleration in November. Still, rates of expansion in factory orders, production and exports remained far away from those recorded at the start of 2019, with subdued underlying demand largely blamed for this," said Pollyanna de Lima, Principal Economist at IHS Markit.

According to the survey, growth of manufacturing activity in November was supported by the launch of new products and better demand, though restrained by competitive pressures and unstable market conditions.

"Some level of uncertainty regarding the economy was evident by a subdued degree of business optimism. Also, companies shed jobs for the first time in over a year-and a-half and there was another round of reduction in input buying," Lima said.

Lima further noted that the weakness of these forward-looking indicators suggest that firms are bracing themselves for challenging times ahead.

On the inflation front, there were only marginal increases in both input costs and output charges in November.

"PMI data continued to show a lack of inflationary pressures in the sector which, combined with slow economic growth, suggests that the RBI will likely extend its accommodative policy stance and further reduce the benchmark interest rate during December," Lima said.

The Reserve Bank may cut interest rates for the sixth straight time on December 5 to support growth that has continued to slip to more than six-year low on slump in manufacturing, bankers and experts said.

In five reductions so far in 2019, interest rates have been lowered by a total of 135 basis points over concerns that growth momentum is slowing down and also to try to boost liquidity in the financial system.