In January-March, annual growth slumped to 5.8 per cent, the slowest pace in 20 quarters. 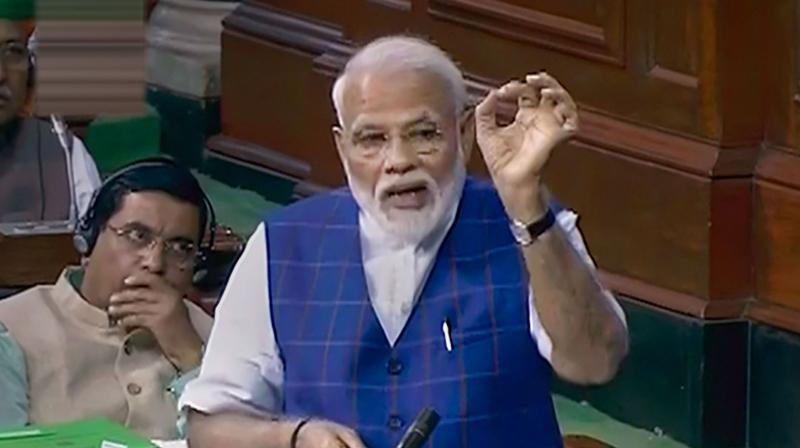 New Delhi: Prime Minister Narendra Modi’s government on Friday will unveil a budget that is expected to cut taxes on business and raise spending in a bid to shore up consumption and faltering economic growth.

Analysts say Modi, boosted by a sweeping election victory, hopes to use the budget to restart reforms and deal with a series of economic woes.

In January-March, annual growth slumped to 5.8 per cent, the slowest pace in 20 quarters. Growth for the financial year that ended in March was 6.8 per cent, also a five-year low, and indicators such as plummeting industrial output and automobile sales have stoked fears of a deeper slowdown.

A shortfall in monsoon rains, pivotal for the farm sector that employs nearly half of India’s workers, has increased concerns of rural distress and strengthened the case for intervention, a leader of Modi’s ruling Bharatiya Janata Party (BJP) said.

Shilan Shah at Capital Economics in Singapore said in a note “Given the recent economic slowdown, the finance minister is likely to announce more accommodative tax and spending measures.”

In February, then-Finance Minister Piyush Goyal presented an interim budget for the year beginning April 1, to maintain government functions while a weeks-long election was under way.

On Friday, new minister Nirmala Sitharaman will present a full-year budget that Agarwal said could lower corporate taxes for small and medium-sized businesses as well as personal ones to revive consumption by the middle class that gave Modi a second term, while withdrawing some tax exemptions.

In 2018, Indian government reduced the corporate tax rate to 25 per cent from 30 per cent for companies with annual turnover of 2.5 billion Indian rupees (USD 36.3 million) or less.

Following election promises, the government could present a plan for investing up to 100 trillion rupees (USD 1.45 trillion) on highways, railways and ports while budgeting another 25 trillion rupees for increasing farm productivity over five years, BJP officials said.

To meet the funds required for all that, Sitharaman may need to increase February’s 3.4 per cent target for fiscal deficit to gross domestic product to 3.6 per cent, said a senior government official.

A Reuters poll showed economists expected a 3.5 per cent target.

Sitharaman is also likely to seek a higher dividend from the central bank, draw up plans to raise funds from a 5G telecom auction and propose more privatisation, sources said.

After becoming prime minister in 2014, Modi improved public finances, trimming the fiscal deficit to 3.4 per cent from 4.5 per cent in 2013-14, mostly through cuts in subsidies and higher retail taxes on fuel.

However, he is now under pressure to loosen the purse strings to meet election promises and jack up the growth rate.

“A large part of the economy is facing a recession with a fall in rural demand and private investments,” said Ashwani Mahajan, chief of the economic wing of the Rashtriya Swayamsevak Sangh, the ideological parent of Modi’s ruling group.

“It is the right time to expand the fiscal deficit up to 4 per cent of GDP,” he said adding the budget could provide tax incentives for food processing, logistics and small businesses as well as affordable housing.

Private investment in India rose an annual 7.2 per cent in January-March, down from 8.4 per cent the previous quarter. Capital investment growth slowed to 3.6 per cent from 10.6 per cent.

Modi has set an ambitious target of turning India into a USD 5 trillion in the next five years from USD 2.7 trillion, which will require an annual growth rate of over 10 per cent, economists said.

But that will require a big second wave of reforms that Modi shied from during his first term, economists say. To unlock potential and growth more robustly, in their view, India needs to make land acquisition easier and amend labour laws that make hiring and firing of workers difficult.

BJP’s Agarwal says the budget speech “will lay a roadmap of economic reforms for the next five years, with an objective of boosting economic growth.”