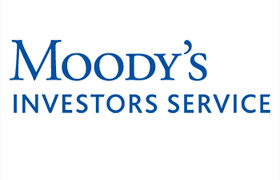 New Delhi: Moody's Investors Service on Friday said it has lowered its 2019 GDP growth forecast for India to 5.6 per cent as slow employment growth weighs on consumption.

It expects economic growth to pick up in 2020 and 2021 to 6.6 per cent and 6.7 per cent respectively, but sees the pace of growth remaining lower than past.

"India's economic growth has decelerated since mid-2018, with real GDP growth slipping from nearly 8 per cent to 5 per cent in the second quarter (April-June) of 2019," it noted.

It further slipped to 4.5 per cent in July-September quarter.

"Consumption demand has cooled notably, with slow employment growth weighing on consumption," it said. "We expect economic growth to pick up in 2020 and 2021 to 6.6 per cent and 6.7 per cent, respectively, but the pace of growth will remain lower than in the recent past."

Moody's said fiscal measures undertaken by the government - such as corporate tax rate cuts, bank recapitalisation, infrastructure spending plans, support for the auto sector and others - do not directly address widespread weakness in consumption demand, which has been the chief driver of the economy.

In addition, interest rate cuts by the Reserve Bank of India are not being adequately transmitted to lending rates because of the credit squeeze caused by disruption in the non-bank financial sector, it said.

Commercial vehicle sales in India declined 22.95 per cent in the six months ended September 30 2019 compared with the same period a year earlier.

"Commercial vehicle sales have been hit by the liquidity squeeze in the financial sector and the economic slowdown, despite support from government stimulus measures to boost demand and vehicle purchases ahead of India's migration to new emission standards," it said.

It expected auto loan delinquencies to increase in the next few quarters as the economic slowdown will constrain demand for freight transportation and put pressure on freight rates.