he Ministry of Agriculture on Friday said rice sowing in the country had declined 7.66 per cent to 374 lakh hectares. 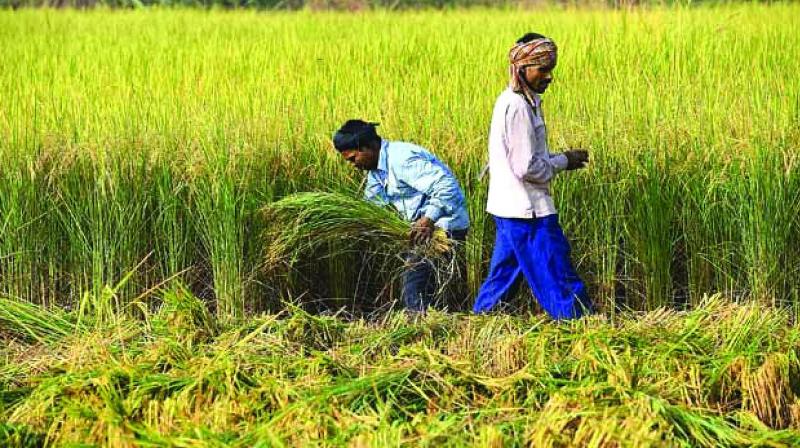 The country as a whole received 4 per cent more monsoon rains from June 1 to September 13, the government-run India Meteorological Depart-ment said on Friday.

PUNE: The agri-GDP growth this year would be about 3 per cent despite rice sowing being disappointing in the country’s rice bowl of West Bengal, Uttar Pradesh, Jharkand and Bihar. Rice is the country’s major Kharif crop.

But the good news is that the sowing of winter crops, or Rabi such as wheat, pulses and oilseeds, would be much higher on account of 113 major reservoirs across the country filling up to a record 80 per cent of the storage capacity, according to the latest report of the Central Water Commission.

The country as a whole received 4 per cent more monsoon rains from June 1 to September 13, the government-run India Meteorological Department said on Friday. This would aid sowing and nurturing of the Kharif crops and help Rabi crops as well.

“We expect the agri GDP growth to be normal this year at about 3 per cent despite lower sowing acreage of the Kharif’s main crop paddy,” Suvodeep Rakshit, Senior Economist at Kotak Institutional Equities Research told Financial Chronicle.

He said the total yields of the Kharif crops have improved substantially and the decline in rice sowing is not too high despite the rice basin receiving about 20 per cent deficient rains impacting the crop.

“The sowing acceleration came in the last two weeks and the sowing season window is almost over. Therefore, the yield and the overall quality of the crops will be impacted,” Sreejith Balasubramanian, Economist – Fund Management at IDFC AMC told Financial Chronicle.

He said this year it would be a normal year for Kharif crop production even though farmers have rushed into sowing in August and September whereas it should have ideally begun in July.

“Because of this there may not be incremental contribution of agri GDP to the overall GDP of the country. So we have to wait and watch how this will impact rural distress,” Balasubramanian said.