Fiscal deficit target to as much as 3.6 per cent of GDP from an already upwardly revised target of 3.4 per cent. 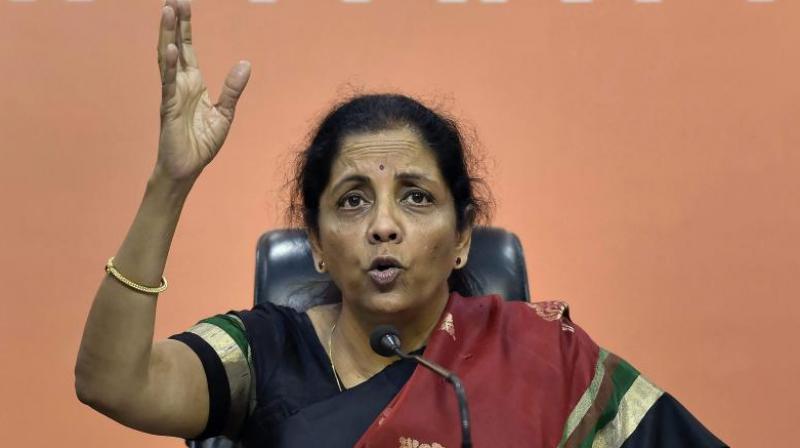 New Finance Minister Nirmala Sitharaman presents her first budget on July 5, for the fiscal year ending March 2020. It is also the first budget of Prime Minister Narendra Modi’s second term after his government was returned in a landslide election win last month.

Since becoming prime minister in 2014, Modi succeeded in improving public finances, trimming the fiscal deficit to 3.4 per cent of gross domestic product (GDP) from 4.5 per cent in 2013-14, mostly through subsidies cuts and fuel taxes.

He is now, however, under pressure to loosen the purse strings to follow through on election promises such as increased spending on roads and housing and tax cuts for companies and individuals.

“There is no other option but to defer the fiscal consolidation target as boosting economic growth and reviving private investment is our top priority,” a senior finance ministry official involved in the budget discussions, told Reuters.

Such a decision would ultimately be made by the prime minister’s office after consultation with advisers, he said.

That may well mean raising the fiscal deficit target to as much as 3.6 per cent of GDP from an already upwardly revised target of 3.4 per cent, set in February’s interim budget, he said. The original goal, set in February 2018, had been 3.3 per cent.

Slipping fiscal discipline would hurt the “credibility” of the budget and in turn hit investment, the bond market and the rupee, analysts say.

“If the (fiscal) target does slip by 10 or 20 bps it will be seen as a setback,” said A. Prasanna, chief economist at ICICI Securities Primary Dealership in Mumbai.

He said bond markets are particularly vulnerable given they still assume the government will maintain the deficit target from February’s interim budget due to a higher expected dividend from the central bank’s market investments.

Officials said the main factor behind the expected slippage is a big shortfall in net tax collections that could exceed 1 trillion rupees (USD 14.36 billion) or about 6 per cent of the initial target set in February’s interim budget.

That puts the government in a particularly difficult place given recent signs of economic weakness, which has put political pressure on Modi to inject rapid fiscal stimulus.

Such measures would include increased infrastructure spending and tax incentives to corporate and individual taxpayers to boost private investments and consumer demand, the officials said.

Last Saturday, Modi met state chief ministers and advisers to discuss possible stimulus and ways to grow GDP to USD 5 trillion by 2024, from about USD 2.7 trillion in the March quarter. A 3.6 per cent deficit target would free up about 420 billion rupees (USD 6.03 billion) to cut tax rates or offer new investment sweeteners, another official said.

A finance ministry spokesman declined to comment for this story.

In the last fiscal year, tax revenue slumped more than 11 per cent, forcing the government to cut spending by more than 1.45 trillion rupees in the current fiscal year to meet the 3.4 per cent of GDP deficit target, said an official in the budget division.

Providing a possible boost to overall revenues in the current fiscal year is an increase in the central bank dividend to 1 trillion rupees from 690 billion rupees while the 900 billion rupee in privatisation receipts could be revised upwards slightly, one of the officials said.

However, the bigger risk now is that a prolonged slowdown in private investment and consumer demand, as seen in a 20 per cent fall in May auto sales, could erode tax collections even further.

These problems could be compounded if a weak monsoon season, with rainfall already well behind schedule, adds to household sector pain.

Business groups have urged the government to consider cutting the corporate tax rate and introducing incentives to boost new investments.

They also complain banks have only cut lending rates 10-15 basis points despite the central bank reducing its benchmark rate by 75 basis points this year.

Given these constraints, there may be focus on measures that help free up financing to parts of the economy that need it most, particularly small businesses, which account for one-third of GDP.

Bank credit to small businesses grew less than 3 per cent in the year to March compared with over 8 per cent for big firms and 17.8 per cent for services like transport and trade.

One of the government advisers said there are plans for an additional 300 billion rupees in capital injections to help state banks clean up an estimated USD 150 billion in bad loans, which would in turn help banks more easily lend.

“We believe the fiscal channel in India is more direct and quicker and the Indian financial system is in need of some serious repair,” Soumya Kanti Ghosh, chief economist at country’s largest bank, State Bank of India said in a note last week.