India is embroiled in disputes with United States over tariffs, Indian price caps on imported medical devices, most from the US. 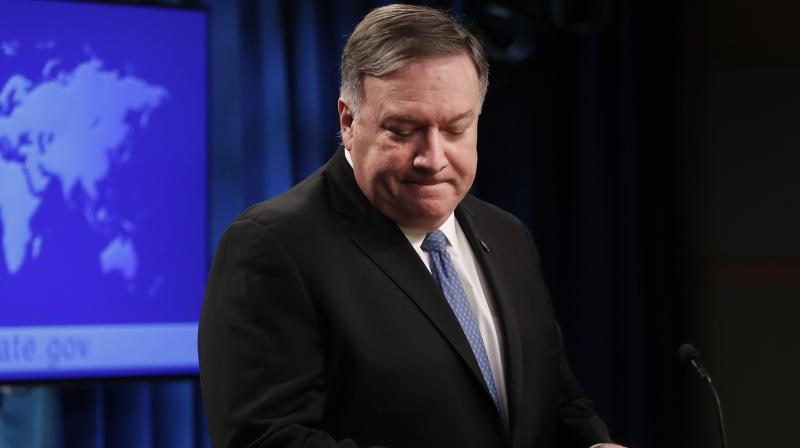 Mike Pompeo arrives in New Delhi on Tuesday for talks that are aimed at laying the ground for a meeting between US President Donald Trump and Indian Prime Minister Narendra Modi later in the week at a G20 meeting in Japan. (Photo: File | AP)

New Delhi: US Secretary of State Mike Pompeo will try to soothe increasing friction with India over trade, data flows and arms from Russia during a visit next week and instead focus on strategic ties between the two big democracies, officials said.

Pompeo arrives in New Delhi on Tuesday for talks that are aimed at laying the ground for a meeting between US President Donald Trump and Indian Prime Minister Narendra Modi later in the week at a G20 meeting in Japan.

India is embroiled in disputes with the United States over tariffs, Indian price caps on imported medical devices, most from the United States, and Indian rules on e-commerce that impose conditions on the operations of US giants such as Amazon and Walmart.

Another issue that has alarmed India is the possibility of US restrictions on work visas for Indian professionals in retaliation for India’s insistence on local data storage by big foreign firms, even though the State Department said on Thursday it had no such plan.

“US-India trade ties, at least between our capitals, are certainly worsening. We both have leaders who look at trade as a zero-sum game,” said Richard Rossow, a specialist on US-India ties at the Center for Strategic & International Studies in Washington.

The Indian government led by Modi, who was re-elected last month with a big majority, says it has been trying to negotiate solutions to the disputes with the United States but that, as a developing country, it has to protect the interests of its people.

Trump has repeatedly criticised India for its high tariffs and last month raised the stakes with the withdrawal of a decades-old trade privilege.

An Indian government official said trade would be addressed during Pompeo’s visit but the two countries had a broader political and security relationship.

“There will be certain issues between us that will be on the table at all points of time,” the official said.

“But it should not detract from the over-all direction of the relationship, which is positive.”

Both countries are wary of the growing might of China.

A US State Department spokesman said on Thursday Pompeo would seek to advance a strategic partnership with India.

India and the United States eyed each other warily over decades of Cold War suspicion, when India was closer to the then Soviet Union.

But the United States has become one of India’s top arms suppliers over the past decade, selling more than USD 15 billion of weapons such as transport planes, long range submarine hunters and helicopter gunships.

US firms Lockheed Martin and Boeing are in the race for a contract to build 110 fighter planes in a deal estimated at USD 20 billion.

In 2016, the United States declared India a major defence partner, opening the way for sales of high-tech military equipment seen as part of a US aim to build up the country as a counterweight to China in the region.

But here too, new strains have emerged over an Indian plan to buy S-400 surface-to-air missile systems from Russia, which can trigger US sanctions under the its Countering American Adversaries Through Sanctions Act (CAATSA), prohibiting any engagement with Russia’s defence sector.

India, which signed the deal with Russia last year, has been hoping the Trump administration would give it a waiver, but that has not been forthcoming.

“There is no blanket waiver or country waiver when it comes to the S-400,” US principal deputy assistant secretary for South and Central Asia, Alice Wells, told Congress this month, adding that the United States had “serious concerns” about the possible Indian purchase.

“We are continuing our conversations about how the US or other defence providers could assist India,” Wells said.