The government also announced a slew of measures to boost exports and real estate sector. 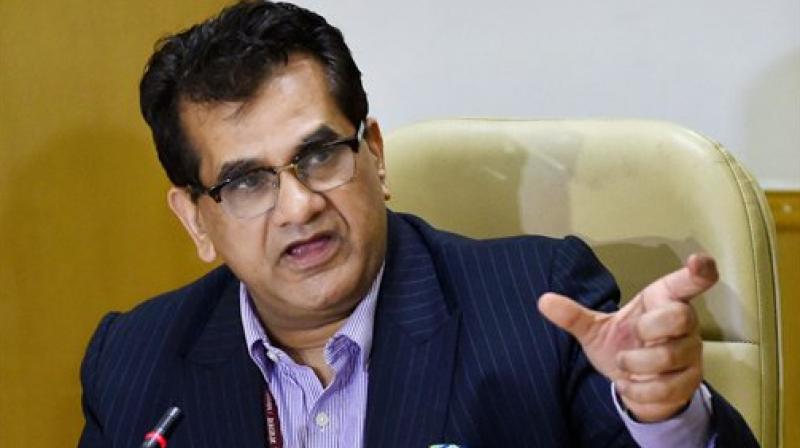 New Delhi: The government is determined to take India back to a high trajectory growth rate of 8-9 per cent and the real challenge before the country is to sustain that growth, NITI Aayog CEO Amitabh Kant said.

His remarks come at a time when the government has taken several measures to boost the economy that has hit over six-year low of 5 per cent.

"The government is determined to take India back to a high trajectory growth rate of 8-9 per cent and the challenge before India is really to grow on a sustained basis of 8-9 per cent per annum year after year for three decades or more," Kant said last evening.

He was speaking during 61st Holland Memorial Lecture organised by the Mining, Geological & Metallurgical Insititute of India (MGMI).

"But if we have to do this for the next three decades, energy (sector) has to be at the centre of this economical growth," he said adding that no country in the world has been able to grow for long periods of time without focusing on energy and managing it efficiently.

"Though we are comparatively an energy efficient economy, the energy requirement per unit of GDP is much lower than the world average and we would be taking all measure to increase this efficiency further," he said.

"In the last quarter of 2017-18 we grew at 8.1 per cent. This growth has fallen to 5 per cent in the first quarter of 2019-20. And there is a lot of debate going on whether this is a cyclical downturn, whether there are structural challenges to the Indian economy," he said.

Several measures have been taken by the government to revive the sagging economy. The RBI has brought down repo rate by about 110 basis points this year and the finance minister has undertaken four economic boosters, he explained.

In the biggest reduction in 28 years, the government on Friday cut corporate tax rate by almost 10 percentage points as it looked to pull the economy out of a six-year low growth and a 45-year high unemployment rate by reviving private investments with a Rs 1.45-lakh crore tax break.

The first set of announcements was made on August 23 that included rollback of the enhanced surcharge imposed on foreign portfolio and domestic investors in Budget 2019-20.

It was followed by announcement with regard to consolidation of 10 public sector banks (PSBs) into four on August 30.

The government also announced a slew of measures to boost exports and real estate sector.