The 5 leaders noted that world economic growth appears to be stabilising and is generally projected to pick up moderately. 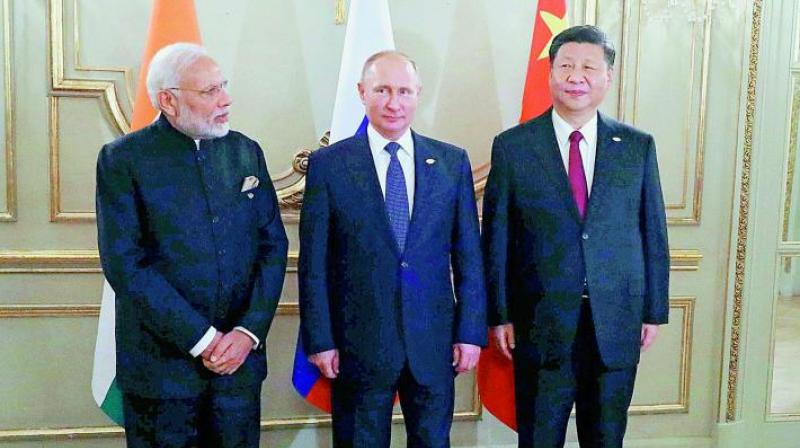 Osaka: India and four other BRICS nations on Friday called for rules-based multilateral trading system, as embodied in the WTO, to ensure transparent, non-discriminatory, open and inclusive international trade, amid growing protectionism.

In a joint press statement after the meeting, the five leaders noted that the world economic growth appears to be stabilising and is generally projected to pick up moderately later this year and into 2020.

However, the strengthening of growth remains highly uncertain, with rising trade and geopolitical tensions, commodity price volatility, inequality and insufficient inclusive growth, and tighter financial conditions adding to the risk, it said.

In this scenario, it said, projections indicate that BRICS will continue to account for more than half of global economic growth through 2030.

Amid the ongoing trade war between the US and China, the leaders expressed their commitment to transparent, non-discriminatory, open, free and inclusive international trade.

Protectionism and unilateralism run counter to the spirit and rules of the World Trade Organisation (WTO), they observed.

"We reaffirm our full support for the rules-based multilateral trading system, as embodied in the WTO, to ensure transparent, non-discriminatory, open and inclusive international trade.

"We express our common readiness to engage in frank and result-oriented discussions with other WTO members with a view to improving the functioning of the WTO," they said.

The leaders also emphasised that it is imperative that the WTO negotiation agenda be balanced and be discussed in an open, transparent and inclusive manner.

Observing that the WTO dispute settlement mechanism is an indispensable pillar of the multilateral trading system, the statement said the Appellate Body is essential for the proper and effective functioning of the Organisation.

"We remain committed to the preservation of a functioning two-stage binding adjudication system for disputes in the WTO. Recalling the urgency of solving the impasse in the appointment of members of the WTO Appellate Body, we urge that the Appellate Body selection process be initiated immediately," they said.

Leaders expressed their commitment to a strong, quota-based and adequately resourced International Monetary Fund (IMF) at the centre of the Global Financial Safety Net and the conclusion of the 15th General Review of Quotas should take place during 2019 Annual Meetings.

Appreciating the role of the New Development Bank (NDB) in infrastructure financing and sustainable development, it said, the bank will continue its efforts in building a strong, balanced and high-quality portfolio of projects.

"We emphasize the importance of a focused effort to address the backlog in critical infrastructure investments in member countries. The NDB will be strengthened by the establishment of regional offices. We welcome the NDB's commitment to mobilise resources in the domestic currencies of all its members, starting in China, as well as the upcoming bond programmes in South Africa and Russia," it said.

Leaders highlighted the importance of the BRICS Contingent Reserve Arrangement (CRA) as a mechanism to forestall short-term balance of payment pressures in member countries.

"Following the successful test run conducted in 2018, we commit to further more complex test runs to ensure its operational readiness to respond to a call on resources, if needed. We welcome the functioning of the CRA System of Exchange in Macroeconomic Information (SEMI)," it said.

Welcoming efforts to establish the BRICS Local Currency Bond Fund, it said they look forward to starting its operation. "We also support cooperation between the CRA and the IMF," it said.