Commerce Secretary Anup Wadhawan said the current slowdown in exports is mainly due to a decline in petroleum products. 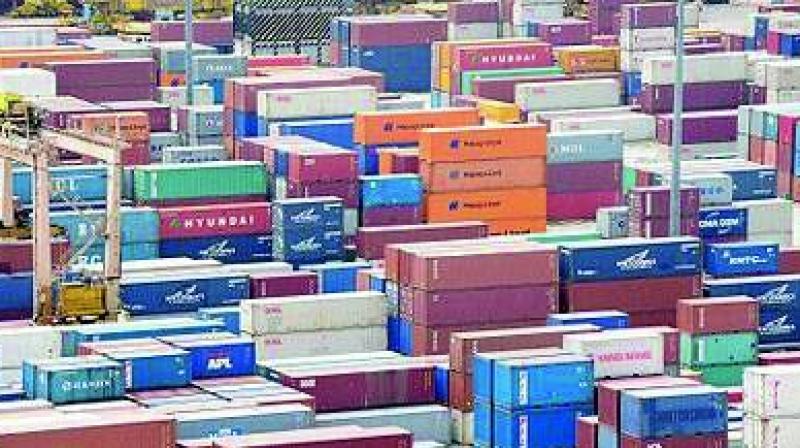 FIEO Director General Ajay Sahai said the global situation is likely to improve in the first half of 2020, which would have a positive impact on India's exports.

New Delhi: The continuous contraction in India's exports is likely to stop next year but the rate of growth will be subdued on account of the uncertain global trade situation due to rising protectionism.

Commerce Secretary Anup Wadhawan said the current slowdown in exports is mainly due to a decline in petroleum products, which constitute 13.42 per cent of overall outward shipments.

This decline, he said, is mainly on account of fall in petroleum prices which has driven the export value downwards.

However, "the positive growth in the exports of non-conventional commodity groups like electronic goods, drugs, and pharmaceuticals, organic and inorganic chemicals, augurs well for future growth," he told PTI.

India's export growth is in the negative zone since August 2019 due to a steep fall in shipments of key sectors like petroleum, engineering and gems and jewellery.

Labour-intensive sectors such as carpets, ready-made garments, handloom and leather too are recording decline in export growth.

As per the World Trade Organization (WTO), global merchandise trade volumes are expected to rise by only 1.2 per cent in 2019, substantially slower than the 2.6 per cent growth forecast in April 2019.

However in 2020, the growth in trade volume is projected to accelerate to 2.7 per cent.

FIEO Director General Ajay Sahai said the global situation is likely to improve in the first half of 2020, which would have a positive impact on India's exports.

"If the global situation improves, which is likely in the first half of 2020, we may look for 15 per cent growth in exports in the next financial year (2020-21). Exports will come out of negative zone next year but the rate of growth will not be in double digits," he said.

He added that the order book position of Indian exporters is encouraging and less volatility in the domestic currency has also been a positive factor for traders.

Sahai also said that Indian exports have to be aligned with changing import patterns of the global economy as 50 per cent of the world imports today is accounted by electrical and electronics products, automobiles, machinery, petroleum products and plastic items.

"While employment-intensive sectors should be pushed in exports, the new strategy should focus on technology-driven sectors," he said.

"There is a need to take structural reforms to increase the competitiveness of Indian products in the global markets," Joshi said.

The commerce ministry is considering several steps such as the announcement of the new WTO-compliant export incentive scheme and the new foreign trade policy for the next five years in 2020 to push the country's exports.

The ministry has conducted a series of meetings with concerned stakeholders to finalise the foreign trade policy.

On the trade front, India has been negotiating the mega free trade agreement RCEP  (Regional Comprehensive Economic Partnership) since 2013. But in November, Prime Minister Narendra Modi said India will not join the RCEP deal as negotiations failed to satisfactorily address New Delhi's "outstanding issues and concerns".

Since January this year, exports have recorded a low rate of growth and slipped into the negative zone in August. During April-November 2019-20, the country's exports contracted by 2 per cent to USD 212 billion.

Going by the current trend, FIEO has estimated that the exports may stand at USD 330-340 billion in the current fiscal.