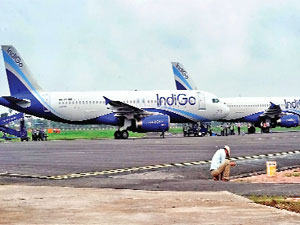 Airlines set to get input tax credit for economy tickets

In a development that could bring relief to airlines such as IndiGo, SpiceJet and GoAir, the aviation ministry has accepted the industry demand for extending complete benefits of input tax credit (ITC) to economy class travel under the Goods and Services Tax (GST). It will soon take up the issue with the revenue department.

“Input credits for economy class should be made as for business class. The matter may be followed up with the revenue department,” according to minutes of a meeting chaired by aviation secretary RN Choubey on July 31.

The GST law, which kicked in from July 1, provides for certain input tax credit only on business class tickets. In the new indirect tax regime, a GST of 5 per cent is levied on economy class travel with ITC available only on input services. In comparison, business and first class tickets attract a levy of 12 per cent with full ITC.

“ln the absence of any exemption given on import of aircraft and aircraft spares, ATF not being covered within the ambit of GST and lastly with such imposed restriction on ITC credit of inputs on economy class, the cost and cash flow impact to the airlines is likely to be very detrimental,” the airline lobby group Federation of Indian Airlines (FIA) had said earlier in a communication to the aviation ministry.

An airline official, who attended the July 31 meeting of stakeholders, said that low-cost airlines are lobbying hard for extending ITC to economy class as they fly all-economy flights.

IndiGo and SpiceJet are low-cost carriers. They fly only economy class and not J class. So, they would not be able to take single paisa credit (for goods). That is why they are clamouring. Of course, others also want (credit). The issue is being escalated so that some relief could be given to the carriers," he said.

Among a dozen domestic scheduled carriers, only three -- Air India, Jet Airways and Vistara — offer business class seats with the remaining all flying only economy seats. The largest carrier IndiGo fly only economy class configuration and has about 41 per cent market share.