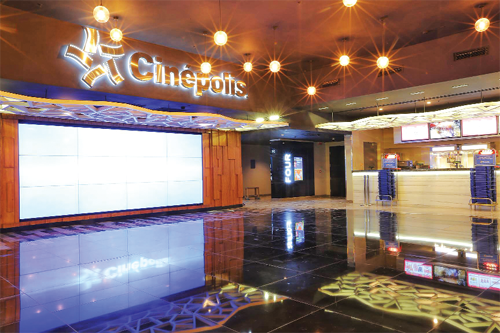 Cinepolis has introduced the world’s brightest and costliest cinema laser projector---DP 4K-60L---at one of its screens at Royal Meenakshi, Bangalore. The projector, introduced for the first time ever in the country by any cineplex brand so far, will beam crystal-clear images, coupled with powerful digital sound system, creating a whole new, close-to-real experience for movie viewers. The machine is designed to provide a premium cinematic experience that offers brightness of 56,000 lumens, twice the brightness of any xenon projector.

Cinepolis Asia managing director Javier Sotomayor said, ``We aim to provide the best cinema viewing experience to our movie patrons in this country. The technology will revolutionalise the movie viewing experience and it is the next stage of advancement for film projectors.’’

Offering a superior image quality with an exceptional brightness level and increased contrast ratio, the newly introduced laser audi (where the projector is used) will make watching movies more realistic with radically improved 3D movie experience. Even the 2D images it displays are laser-sharp with saturated and uniform colours, the company said.

“Cinepolis has been disrupting India’s cinema projection industry by introducing newer technologies since its entry into the country. We introduced the new projector in tech savvy Bangalore as a pilot and based on viewer responses we may have few more such projectors in the country,’’ said Devang Sampat, director-strategic initiatives, Cinepolis India.

Cinepolis is quite bullish on India and it already operates 350 screens and by end of this year it would have added another 50 screens. The company has plans to invest Rs 1,500 crore to fuel its second round of growth in India that would include setting up 500 additional screens.

It was in 2009, Cinepolis, world’s second largest multiplex company, entered India by opening four-screen plex in Amritsar. Later it acquired 83 screens owned by Fun Cinemas. It also has 15 megaplexes in the country. Cinépolis was mostly instrumental in converting the Indian cinema screening industry into 2K digital.