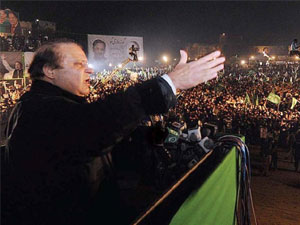 Pakistan's Supreme Court disqualified Prime Minister Nawaz Sharif from office on Friday over undeclared assets, plunging the nation into political turmoil after a period of relative stability. Sharif swiftly resigned but in a statement his spokesman said there were “serious reservations” about the judicial process after the court ordered a criminal probe into his family over corruption allegations stemming from the ‘Panama Papers’ leaks of international offshore companies.

(Reports from Pakistan suggested that the prime minister’s younger brother, Punjab chief minister Shahbaz Sharif, was a strong contender to replace him as prime minister. He would have to step down from that role and be elected to the National Assembly before he is eligible to be prime minister. This will need to be done quickly and involve some one to resign his seat in parliament so that an election is held to enable the younger Sharif’s election to the country’s top legislative body).

The supreme court's five-member panel ruled unanimously that Sharif should be disqualified after an investigative team alleged his family could not account for its vast wealth.

“He is no more eligible to be an honest member of the parliament, and he ceases to be holding the office of prime minister,” judge Ejaz Afzal Khan said in court.

The court enacted little-used Article 62 of the constitution, which allows disqualification of any lawmaker found to be dishonest. The court said Sharif failed to declare income from a company in the United Arab Emirates ahead of his election in 2013. The Supreme Court ruled in April there was insufficient evidence to remove Sharif from office – by a 3-2 verdict – but it ordered a probe by an investigative panel that included members of the military intelligence agencies.

The Joint Investigation Team (JIT) this month returned its findings in a 254-report that said Sharif's family assets do not match their earnings. The panel also accused his children, including daughter Maryam, of signing forged documents to obscure ownership of the London flats.

The Supreme Court's decision to include two members of the country's military intelligence agencies as part of the six-person JIT team had fuelled rumours Pakistan's powerful generals had a hidden hand in the probe against Sharif. The military has carefully distanced itself from the proceedings.

The ouster of Sharif, 67, who has now served as premier on three separate occasions, also raises questions about Pakistan's fragile democracy. No prime minister has completed a full term in power since Pakistan’s independence.

The court verdict marks a major political victory for opposition leader Imran Khan, chief of the Pakistan Tehreek-e-Insaaf (PTI), who last year threatened mass street protests unless Sharif's wealth was investigated. Khan had pounced on the leaking of the Panama Papers, which revealed Sharif's family had bought posh London apartments through offshore companies.

“Today the people of Pakistan got real justice, a newchapter has begun,” Jehangir Khan Tareen, a member of PTI party, said outside the court.

Khan himself is also under Supreme Court investigation on allegations he failed to declare sources of income, a charge he denies. The court also ordered a criminal investigation into the assets of finance minister Ishaq Dar, one of Sharif's closest allies, who has been credited with steering the economy to its fastest pace of growth in a decade. Earlier, state-run TV and other media reported Dar had been disqualified.

Sharif has alleged a conspiracy against him, although he has not named anyone. His allies, however, have privately spoken of elements in the judiciary and the military, with whom Sharif has strained relations, acting against him. The army denies any involvement.

Sharif's allies say the court has overstepped its remit and point out that no charge of corruption or abuse of authority has been proved. Nor has he ever been convicted. “Those who are happy and dancing will cry tomorrow,” said Abid Sher Ali, a junior minister. “They have stabbed democracy in the back.” Prior to the decision, several cabinet ministers, including Sharif’s closest allies, said the ruling party would respect the verdict.

“Go, Nawaz, Go," shouted supporters of the PTI who had gathered outside the court and jeered politicians from Sharif's party. Analysts have warned that another bout of political turmoil would spook foreign investors, who are already reticent to invest in Pakistan, deterred by security fears and a toughbusiness climate.

The benchmark stock index tumbled 3.4 per cent after the announcement but then regained some ground. The index, which was one of the world's best performing in 2016, recorded major outflows during the two-month investigation into Sharif. The rupee currency, which is part of a managed float, has largely been stable.