In sync with the lower projected output, export projection has also been brought down. 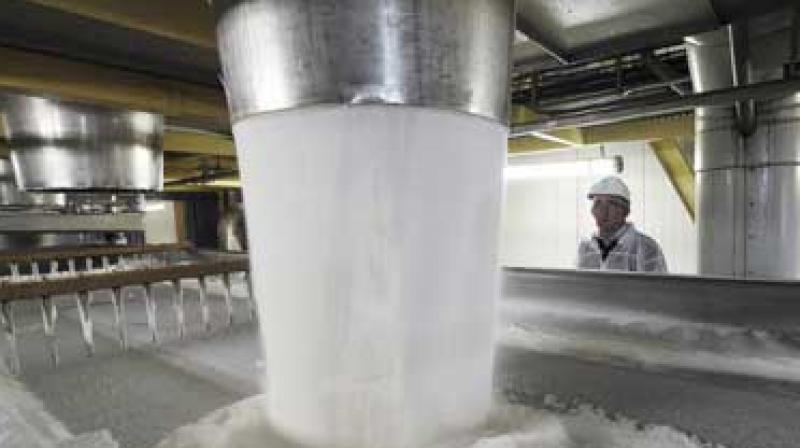 The Centre had earlier set an export target of 6 million MT for sugar. But now, given the current situation, India is expected to export 3.5 million MT of sugar during SY2020. (Photo: AFP)

Kolkata: The projected sugar production for SY2020 (sugar marketing year, 2020) has been revised downwards by different analysts. The Indian Sugar Mills Association (Isma), which in July 2019, had projected the figure to be 28.2 million MT, has now brought it down 7.8 per cent to 26 million MT. Marex Spectron, a London-based commodities broker, has put the figure slightly higher at 27 million MT. The Marex Spectron study suggests that India is expected produce not less than 26 million tonne and not more than 30 million tonne of sugar in SY2020. The average anticipated sugar production, therefore, will be 27.2 million MT. The sugar marketing year in India runs from October to September.

In sync with the lower projected output, export projection has also been brought down. The Centre had earlier set an export target of 6 million MT for sugar. But now, given the current situation, India is expected to export 3.5 million MT of sugar during SY2020. Marex Spectron feels that widely varying estimates of production notwithstanding, India is likely to export nearly 4 million MT of sugar, which is a fairly large tonnage. Nearly 2 lakh tonne of sugar have  been shipped out for exports and sugar mills said that contracts for another 12 lakh tonne have been signed up for exports.

This has to be seen in light of the fact that India's economic growth is expected to slow to a six-year low in 2020, potentially threatening domestic sugar demand and leaving more supplies for exports. Besides, consumers across the world are becoming more concerned about health risks, prompting food producers to seek alternatives, and governments have also levied taxes on sugary drinks. And India has been no exception. Little wonder therefore that consumption has plateaued out in India for more reasons than one. India is expected to consume 25 million tonne to 25.2 million tonne in 2019-20.

Icra, however, expects sugar consumption to increase to 26.7 million MT in SY2020 and the consumption is likely to marginally outstrip production by around 0.7 million MT.

Sabyasachi Majumdar, Senior Vice President & Group Head, Icra Ratings, said: “We expect the closing sugar stocks for SY2020 at around 10.0-10.5 million MT post downward revision of the sugar production estimate as against 12.0-12.5 million  MT earlier. Hence, the domestic demand-supply situation would relatively be better, supporting the sugar prices in the near term, which are currently hovering around Rs 33-34/kg. Further, the FRP sugarcane price is fixed at Rs 275/quintal in SY2020 which is the same as that in previous year. This non-increase in FRP sugarcane price is a saving grace for the sugar industry.”

The other issue facing the sector is that higher ethanol production is dependent upon continuation of government support to the industry as price support to ethanol, especially those manufactured from B molasses and sugarcane juice. The Centre has continued the remunerative prices for the ethanol produced from C-grade molasses, B-grade molasses and sugarcane juice for season 2019-20. Several large sugar mills’ distillery capacities would become operational in SY2020 and SY2021 is a positive thing for the sector, Icra feels.