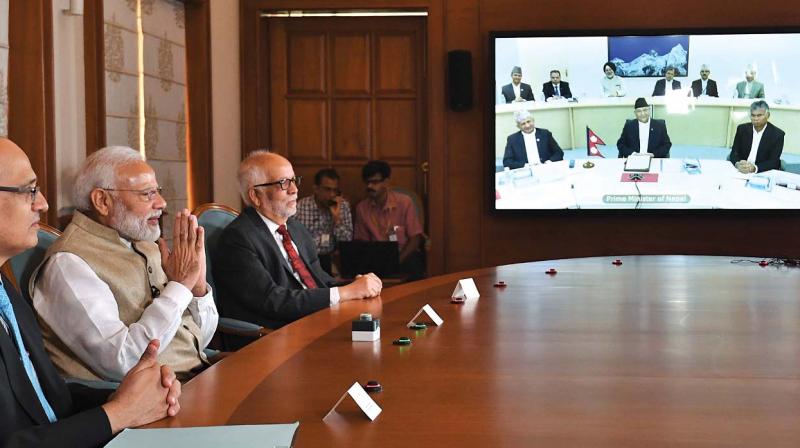 The 69 km-long Motihari-Amlekhgunj oil pipeline was inaugurated by the two leaders via a video link from their respective capitals.

The 69 km-long Motihari-Amlekhgunj oil pipeline was inaugurated by the two leaders via a video link from their respective capitals.

The pipeline, which starts from Motihari in Bihar and ends at Amlekhgunj in Nepal, is first of its kind in the South Asia, the Indian Embassy in Kathmandu said in a statement.

Indian Oil Corporation (IOCL), India's largest refiner, built the pipeline, with an investment of over Rs 324 crore, in collaboration with Nepal Oil Corporation (NOCL), fulfilling the commitment made under an MoU signed in August 2014.

The two sides are also working to build additional storage facility at Amlekhgunj Depot which will augment the storage of petroleum products in Nepal towards which NOCL has committed the estimated cost of Rs 75 crore.

Reiterating India's commitment to Nepal's development, Prime Minister Modi said the bilateral projects conceived by the two countries are progressing well and he hoped to jointly inaugurate them with his Nepal counterpart in the coming days.

Modi pointed out that it was constructed in a "record time".

While the deadline was 30 months, it was readied in just 15 months after the ground breaking ceremony was held last year during Oli's visit to India.

Every year, the pipeline will carry two million metric tonne of clean petroleum products at an affordable price to Nepal.

Modi pointed out that Oli has already announced the benefit of money saved will be passed on the consumers. "The people of Nepal will benefit by this gesture," he said.

Prime Minister Oli said that the pipeline was a big achievement for Nepal.

"We (India and Nepal) have similar visions of development, prosperity, and happiness of our peoples, backed up by solid political commitment and strong determination to realise them."

Oli said that Modi's campaign 'Sabkaa Saath Sabkaa Vikas, Sabkaa Vishwas' and his vision for 'Happy Nepal, Prosperous Nepali' capture the "essence of our commitment, determination, and efforts to transform the development landscape of our respective countries."

"This will without any doubt enhance interconnectedness and interdependence between our two countries," Oli said.

"It is one of the best examples of connectivity in terms of trade and transit and infrastructure," he said.

Officials in Nepal said the pipeline will be used to supply diesel from India in the first phase. The government has made necessary arrangement for the Nepal Army to provide security to the pipeline on their side of the border. Currently, tankers carry petroleum products from India to Nepal as part of an arrangement which is in place since 1973.

The Motihari-Amlekhgunj oil pipeline project was first proposed in 1996. However, the project finally edged closer to reality during Prime Minister Modi's visit to Kathmandu in 2014.