GI tag conveys an assurance of quality and distinctiveness, which is essentially attributable to the place of its origin. 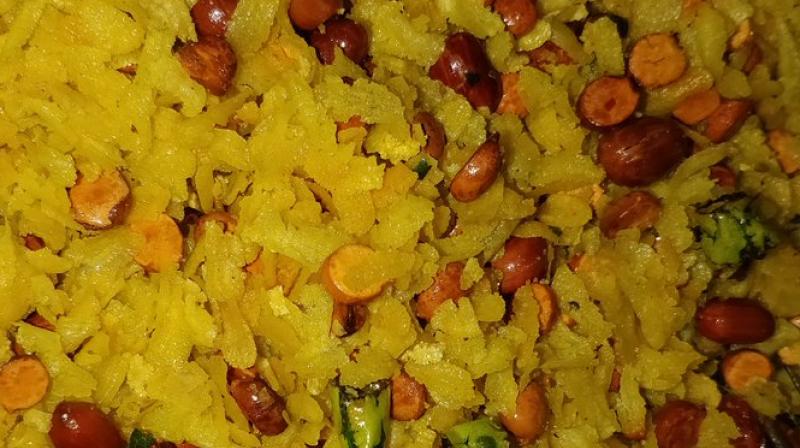 The 'Indori poha' is a breakfast staple made from flattened rice flakes. (Photo: Twitter @dakuwithchaku)

Indore: An organisation of food manufacturers here in Madhya Pradesh is mulling to seek the Geographical Indication (GI) tag for the famous 'Indori poha' and three other popular food items from Malwa region.

The 'Indori poha', a breakfast staple made from flattened rice flakes, 'doodh se bani shikanji' (milk-based sweet drink), 'laung sev' (a clove-flavoured snack) and 'khatta meetha namkeen' (sweet and sour dry snack) from Malwa region are quite a hit among locals and food connoisseurs across the country.

"We are gathering documents which can throw light on the local history of these foods so as to file an application with the Geographical Indication registry to get the nativity tag for these four food items," he said.

"Food lovers enjoy these dishes. We have an old photograph in which former prime minister Jawaharlal Nehru is seen relishing poha. Bollywood megastar Amitabh Bachchan has also on different occasions praised the taste of Indori poha," he claimed.

But, getting the GI tag is not easy and a lot of effort is required along with proofs to file apply at the Geographical Indication registry office in Chennai, he noted.

The Micro, Small and Medium Enterprises (MSME) Development Institute in Indore is helping this food manufacturers' and sellers' body in seeking the GI tag for these four food items.

The institute's assistant director, Neelesh Trivedi, said if these four Malwa region staples get the GI tag, their businesses will get global recognition.

"The GI tag will not only help in branding and marketing but also in safeguarding these products lawfully from duplication," he said.

The Export-Import (EXIM) Bank of India in a report last year suggested that the state government kickstart the process for getting GI tags for the 'Indori poha' and other traditional dishes.

Sweet dishes like the famous 'peda' from Dharwad in Karnataka and the 'Banglar Rasgulla' of West Bengal have already got the GI recognition.

Last year, the famous 'Kadaknath' chicken meat from Jhabua district in MP got the GI tag.

A geographical indication tag is used for an agricultural, natural or a manufactured product (handicraft and industrial goods) originating from a definite geographical territory.

It conveys an assurance of quality and distinctiveness, which is essentially attributable to the place of its origin.

According to experts, the tag gives protection to the producer of genuine products that command premium pricing in domestic as well as international markets.