Beijing and Washington have slapped each other with punitive tariffs covering more than $360 billion in two-way trade. 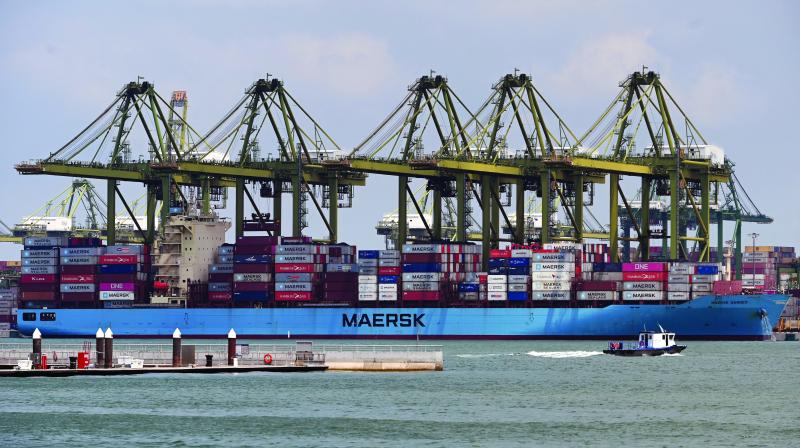 Singapore: A plunge in exports and the worst growth rates for a decade have fuelled concerns about the outlook for Singapore's economy, with analysts saying the figures offer a warning that Asia is heading for a slowdown as China-US tensions bite.

While it may be one of the smallest countries in the world, the export hub is highly sensitive to external shocks and has long been viewed as a barometer of the global demand for goods and services.

The affluent city-state is highly dependent on trade and has traditionally been one of the first places in Asia to be hit during global downturns — with ripples typically spreading out across the region.

The latest signs are not good. In June exports collapsed 17.3 per cent from a year earlier, the fastest decline in more than six years, led by a fall in shipments of computer chips.

That followed a shock 3.4 per cent quarter-on-quarter contraction in GDP in the second quarter. Year-on-year growth came in at just 0.1 per cent, the slowest pace since 2009 during the global financial crisis.

"Singapore is the canary in the coal mine," Song Seng Wun, a regional economist with CIMB Private Banking, told AFP. "And what it tells us is that it is a tough environment."

To warn of danger, miners used to bring caged canaries underground with them as the birds would die in the presence of even a small amount of poisonous gas—signalling to workers that they should make a swift exit.

While steadily weakening growth in China is partly to blame for a slowdown in exports, analysts say the trade war between the US and China has dramatically worsened the situation.

Beijing and Washington have slapped each other with punitive tariffs covering more than $360 billion in two-way trade.

While Singapore—a transit point for products heading to and from Western markets as well as the Asian base for manufacturers of some hi-tech goods— may be showing the strain most, negative data has emerged across the region.

Exports have been slipping across Asia. In India they plummeted 9.7 per cent in June, in Indonesia, Southeast Asia's biggest economy, they dropped 8.9 per cent in the same month while in South Korea they slipped 10.7 per cent in May.

Governments have slash-ed growth forecasts, and gauges of activity in manufacturing and services sectors paint a bleak picture in several countries.

Central banks are moving to spur consumption, with Indonesia and South Korea cutting interest rates on Thursday, the latest in Asia to lower borrowing costs.

Singapore's central bank is seen as likely to ease monetary policy at an October meeting, and some economists are predicting the country could fall into recession next year.

"There are no winners in this trade war. While most of the attention has focused on the trade conflict between China and the United States, the damage has not been confined to these two economies," business consultancy IHS Markit said.

"Exports from Asia's key emerging and advanced countries have taken hits in the first half of 2019."

The US-China tensions have upended the complex supply chains that underpin the modern system of global trade. They have hit Chinese demand for raw materials and other goods that were traditionally sent to the country to be manufactured into finished products and shipped on to other markets. In Asia, these range from palm oil from Indonesia to semiconductors from Singapore.

While Singapore is particularly vulnerable to a slowdown in the global economy, it has traditionally bou-nced back strongly. After contracting in 2009 during the global financial crisis, the city-state's economy grew 14.5 per cent in 2010.

end-of
Tags:
exports, singapore's economy, us and china
Latest From In Other News