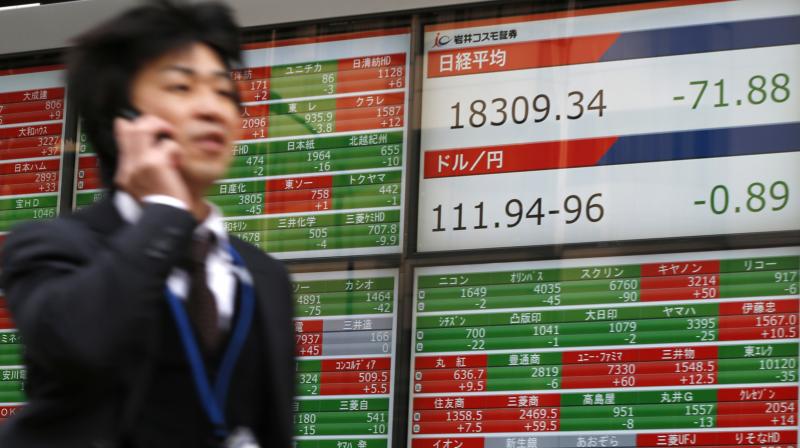 Tokyo: Asian shares rose on Tuesday as hopes for stimulus in major economies tempered anxiety about a global recession, boosting riskier assets and drawing money from safe-havens such as bonds and gold.

In early European trade, the pan-region were flat, German DAX futures were up 0.04 per cent, and Britain’s FTSE futures were 0.03 per cent higher.

Shares in China and Hong Kong swung between gains and losses after China lowered its lending reference rate only slightly in the first publication of a new benchmark since new interest rate reforms were announced on Saturday.

For now, however, investors were cheered by signs policymakers were willing to do more to support their economies in the grip of international trade frictions, led by the bruising Sino-US tariff tussle.

The immediate focus shifts to the minutes of the US Federal Reserve’s last meeting due on Wednesday. Traders are also keenly waiting on the Fed’s Jackson Hole seminar and a Group of Seven summit this weekend for clues on what additional steps policymakers will take to bolster growth.

Hopes for additional stimulus are rising after reports that Germany is prepared to increase fiscal spending, and after the People’s Bank of China took steps to lower corporate borrowing costs.

“There are expectations for looser monetary policy everywhere in the world, and this is cushioning the markets against recent uncertain developments,” said Masayuki Kichikawa, chief macro strategist at Sumitomo Mitsui Asset Management Co in Tokyo.

“China is prepared to do a lot for its economy. I hope to hear more about fiscal spending in Germany. Central banks have no choice but to ease. The remaining question is what comes from fiscal policy.”

China set its new one-year Loan Prime Rate at 4.25 per cent, down 6 basis points from 4.31 per cent previously. It was 10 basis points lower than the People’s Bank of China’s existing benchmark one-year lending rate.

The new five-year LPR rate was set at 4.85 per cent, according to the national interbank funding center.

Chinese shares initially fell at the open but recovered to trade up 0.16 per cent. Stocks in Hong Kong see-sawed, but last traded up 0.1 per cent.

“China has liberalized the lending rate, but they couldn’t shock the banking system by taking rates down sharply,” said Sean Darby, global equity strategist at Jefferies in Hong Kong.

“They have to do this incrementally. They announced this over the weekend to show the direction they’re headed. From that standpoint, I don’t think it’s disappointing.”

Markets overwhelmingly expect the Fed to cut rates again at its Sept. 17-18 policy meeting from the current 2.00 per cent-2.25 per cent. The Fed cut rates in July for the first time in a decade to mitigate the effects of the US-China trade row and a global slowdown.

Last week, financial markets went into a tailspin after the Treasury yield curve briefly inverted when short-term yields traded above those of long-term paper. Investors, who feared a steep global downturn given an inverted yield curve has presaged several past US recessions, dumped riskier assets.

However, a bounce in yields from lows hit last week has eased some of the concerns about the global economy.

Gold, traditionally bought as a safe-haven during times of uncertainty, was steady at USD 1,495.40 per ounce after tumbling 1.2 per cent on Monday, its biggest daily drop in about a month.

The Swiss franc, another safe-haven asset, was last quoted at 0.9812 per dollar, near a two-week low.

Oil was mostly steady at above USD 59 a barrel amid concerns about tensions in the Middle East.