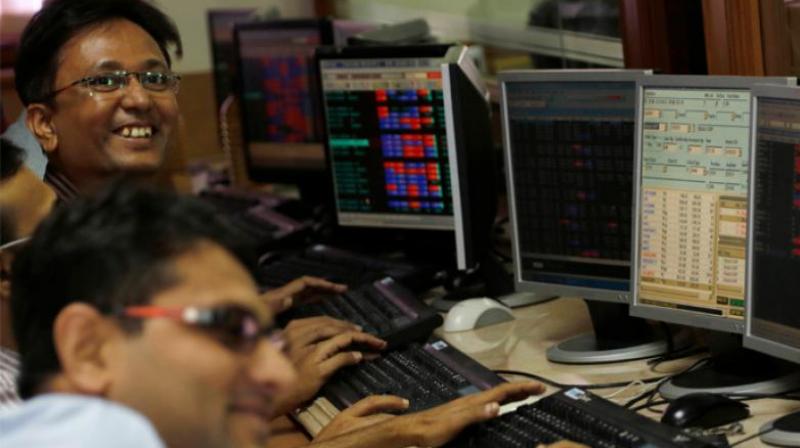 The Sensex posted its biggest single-day jump in over a decade at 1,921 points on Friday after Finance Minister Nirmala Sitharaman delivered a surprise cut in corporate tax rates. (Photo: File | AP)

New Delhi: Equity markets may take a breather following the massive run up on Friday after the government announced a slew of economy-boosting measures, while the overall sentiment is likely to stay upbeat, analysts said.

The BSE Sensex posted its biggest single-day jump in over a decade at 1,921 points on Friday after Finance Minister Nirmala Sitharaman delivered a surprise cut in corporate tax rates. She also clarified that enhanced tax surcharge will not to apply on capital gains arising from sale of any security including derivatives in the hands of foreign portfolio investors (FPI).

Besides, the all-powerful GST Council slashed tax rates on hotel tariffs and some goods with a view to addressing sectoral concerns and spur growth.

"Market will take a breather after a massive run up on Friday by witnessing some correction. It is important to see when FPIs will resume their buying spree and how they are taking the tax rate cut," said Jimeet Modi, Founder & CEO, SAMCO Securities & StockNote.

The reduction in corporate tax, which India Inc hailed as the one which will revive growth and investment, is the single biggest cut in tax rates since India opened up its economy in 1991.

"Markets will witness a revival in enthusiasm as the newly announced fiscal measures will give a relief from the slowdown fears in domestic market. FIIs now have a good reason to come back to India and this progressive step will stimulate consumption and ignite capex cycle," said Vinod Nair, Head of Research, Geojit.

"For next week, we expect the Nifty to continue the upward march with fresh long formations expected along with shorts already running for cover. A fresh momentum in auto, realty, finance and banking sectors may lead the market to pass the 11,500 level," said Romesh Tiwari, Head of Research, CapitalAim.

According to Ajit Mishra Vice President, Research, Religare Broking Ltd, the announcements came just in time as markets were reeling under tremendous pressure, pressured by weak domestic as well as global sentiments.

This week there are no major domestic macroeconomic data announcements scheduled, so factors such as rupee-US dollar trend, crude oil movement and investment pattern by foreign investors would influence trading sentiment, analysts said.

From the global front, the US-China trade talks beginning next month would also keep markets abuzz, they added.