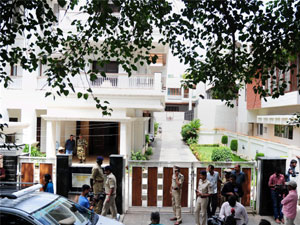 Income Tax sleuths on Wednesday swooped down on 64 properties linked to Karnataka minister DK Shivakumar, who was overseeing the stay of 44 Congress MLAs from Gujarat at a resort near Bengaluru, setting off a political storm ahead of the Rajya Sabha polls.

An I-Tdepartment official said that over Rs 10 crore cash was recovered during the raids in Karnataka and Delhi in connection with a case of alleged tax evasion involving Shivakumar, a senior Congress leader and the state Energy minister. A “good amount” of jewellery has also been recovered from a teacher’s locker in a college in Bengaluru, the official said, claiming the locker is in the name of a relative of Shivakumar.

The searches had its echo in Parliament where protesting Congress members disrupted the proceedings and questioned its timing even as Finance Minister Arun Jaitley insisted that the action had no connection with the upcoming Rajya Sabha polls in Gujarat.

Ahmed Patel, political secretary to Congress president Sonia Gandhi, is one of the candidates and is facing a tough battle. Polls for 10 Rajya Sabha seats from Gujarat, West Bengal and Madhya Pradesh are due to be held on August 8.

Patel accused the BJP of indulging in an “unprecedented witch-hunt” to win one Rajya Sabha seat.

The I-T Department said the timing of the search was decided well in advance. About half-a-dozen note-counting machines were brought at two locations in Safdarjung Enclave in Delhi and in Hasan and Mysuru in Karnataka to count the cash.  While about Rs 7.9 crore cash was recovered from Delhi, about Rs 2.23 crore was found at locations in the southern state, the official said, adding that the department is investigating Shivakumar in a case of alleged tax evasion and huge undisclosed investments in real estate and other sectors.

Certain investments linked to him in Singapore and few other foreign locations are also under the scanner of the department. Some shell firms and their operatives allegedly linked to this case are also being probed, the official added.

The official said the I-T sleuths reached the Eagleton resort near Bengaluru to question the minister, who was staying there overnight.

Shivakumar, who was in-charge of the 44 MLAs lodged there to prevent the BJP from alleged efforts to “poach” them, was at the resort when the search took place, the official said. He was taken to his house in Bengaluru from the resort by the tax sleuths on Wednesday.

Officials said, a total of 39 premises of Shivakumar and his family were raided by a team of about 120 personnel from the department with the aid of central paramilitary forces. Twenty five other locations and premises are being a surveyed under certain sections of the Income Tax Act. As the raids on the resort triggered angry reactions from the Congress, the I-T department said the resort is not being raided. It said only the minister’s room at the resort was “searched” and not of the MLAs from Gujarat.

Jaitley said the raids “should not be linked to the Rajya Sabha election in Gujarat” as was alleged by Congress members. As soon as Rajya Sabha met for the day, Congress leader Anand Sharma raised the issue, alleging that an attempt was being made to “derail and hijack” the elections to the Council of States and the raids were “targetted”. “Since morning they (IT) have started the raids,” Sharma said and questioned the raids’ timing and place.