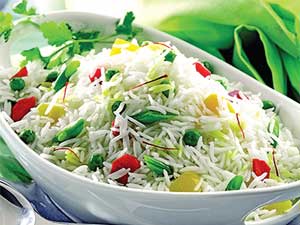 Basmati export price may surge as Iran likely to resume imports
India hopes to increase basmati rice exports to Iran as the Persian nation is expected to resume granting of import permits soon after a gap of more than six months.
A delegation of Indian basmati rice exporters, along with officials of the Agricultural and Processed Food Products Export Development Authority (APEDA), is expected to visit Iran, which was the largest buyer of the Indian aromatic rice in 2012-13 and 2013-14.
As Iran is likely to open its market by issuing fresh import permits, exporters believe there could be a surge in export price. According to trade sources, basmati is being quoted at about $900 a tonne now.
“There were some news reports in Iran with full of misinformation, alleging that the Indian basmati has arsenic concern,” a government official said. The delegation will try to dispel this wrong notion in their meeting with importers and Iranian officials, he added.
Iran curbed rice imports in October 2014 by introducing import permits to protect domestic farmers. There was, however, no official ban on imports. Iran needs around three million tonnes of rice. It produces around two million tonnes and the remaining one million tonnes are imported from countries such as India and Pakistan.
Basmati rice is produced only in India and Pakistan. The long grain, aromatic rice is grown on the foothills of the Himalayas. The non-sticky rice variety is hugely popular in West Asian countries for biryani and pulav.
From P1
Basmati rice in 2015 was exported on the permits issued prior to October 2014. There was no official communication from the Iran government for a long time. However, the permits started in late 2015 and continued for a few months in 2016. About six lakh tonnes of basmati rice were exported to Iran during April-October period of this fiscal and if the permits are opened now the Indian exports could touch 10 lakh tonnes, an industry official said. However, some exporters differ as Iran has also been following strict rule to protect its own farmers. According to APEDA, exporters have realised $788.71 a tonne (or about Rs 54 a kg) from basmati exports during April-October. The price realisation was $909.01 a tonne in the corresponding period of 2015-16. As Iran is likely to open its market by issuing fresh import permits soon, exporters believe there could be a surge in export price. According to trade sources, basmati is being quoted at about $900 a tonne now.
“The main concern is how much quantity Iran will buy from India and how much from Pakistan,” the official said. There is a clear preference for Pusa 1121 variety of basmati in Iran as this is the world’s longest rice after cooking. Though Pakistan has also started growing this variety on a different name, it is yet to get recognition in other countries.
There is also a concern of import duty in Iran, which used to be about 20 per cent when the country had deficient production of rice. Since the import duty is about 40-45 per cent, Indian basmati becomes costlier in local market.
Iran was also allowing basmati imports at concessional currency rates when the US imposed sanctions. But it has stopped any concession for now, particularly after the lifting of sanctions. India’s total basmati rice exports in 2016-17 were about 3 million tonnes by October-end and by March-end this may increase to near about 4 million tonnes, said Vijay Setia, a former president of All India Rice Exporters Association. end-of
Tags:
news
Latest From Companies