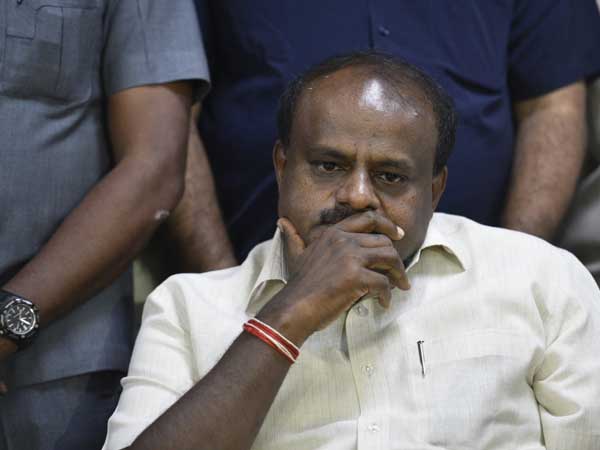 publicly. Sulking over being dropped as minister, Ramesh Jarkiholi indicated his plans to quit as party MLA and said he would make his decision public in four days.

Supporters of another senior state Congress leader Ramalinga Reddy staged a protest after holding a meeting here and expressing displeasure about their leader not being considered during the cabinet expansion Saturday.

Chief minister H D Kumaraswamy (in pic) sought to play down the developments, saying such "emotional reactions" were common and he would speak to the sulking leaders and pacify them. His father and JDS supremo H D Deve Gowda dismissed any threat to the government and said it was stable and the alliance will 'efficiently' fight the 2019 Lok Sabha polls.

In the much-awaited exercise, the six-month old Congress-JDScoalition ministry headed by Kumaraswamy was expanded Saturday wih the induction of eight members from the national party.

However, it was marked by rumblings of dissidence as several senior congress MLAs are upset over their exclusion,with legislators including Reddy, B C Patil, B K Sangamesh and Bheema Naik coming out openly to give vent to their anger.

Meanwhile, allocation of portfolios to the newly inducted ministers is also getting delayed.

Sources said, the wait is on for the arrival of Congress General Secretary in-charge of Karnataka K C Venugopal as there was growing demand for plump portfolios among the new ministers.

Ramesh Jarkiholi told reporters Monday: "Did you see TV yesterday; I'm committed to it. When, why all thesethings I will discuss (with supporters) and decide... Whatever you heard about my phone conversation,I'm committed to it."

He said ".Giveme four days time.I will inform the people of the state aboutmy decision. I have many things to discuss with you (media)."

A purported conversation involving Ramesh Jarkiholi was aired by local TV channels on Sunday where he can be heard speaking about his plans to quit as a Congress MLA, which hadfueled speculations about him defecting to the BJP.