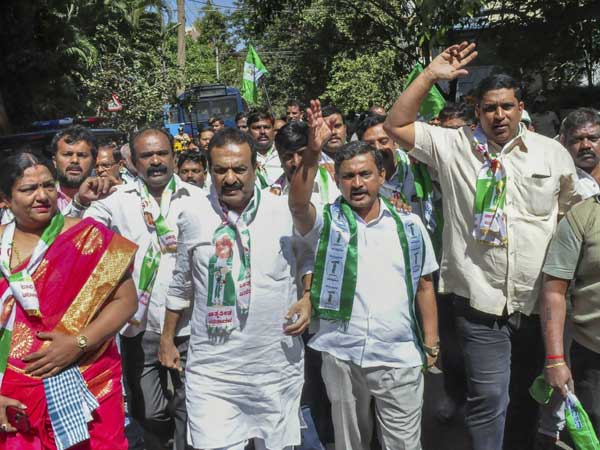 A day after two independent MLAs withdrew support to the ruling coalition in Karnataka, Congress general secretary KC Venugopal on Wednesday asserted that none of his party legislators were going to quit and said a clear picture would emerge on Thursday.

"Not even one MLA is going to quit Congress. I have contacted my MLAs, and therefore, I am telling you this very confidently. In fact, by Thursday evening, you will have a clear picture about Karnataka," he said.

Venugopal was responding to a query on media reportsabout some Congress MLAs led by Ramesh Jarkiholi planning to quit the party and join hands with the BJP to topple the Kumraswamy led-government. Last month, Jarkiholi was dropped from the cabinet. He was also reportedly seen rubbing shoulders with top BJP brass and often gave cabinet and party meetings a slip. As a result, his office was handed over to brother Satish Jarkiholi. According to media reports, Jarkiholi and a few other MLAs were lodged at a hotel at Mumbai. The former minister is in touch with the BJP leadership to reportedly reduce the strength of the government by eliciting support from at least 14 Congress MLAs.

This unholy bid by the BJP, Venugopal said, would not materialise. "It would be a big slap on the face of BJP as it is going to fail in its endeavour to bring the government down. Their shameless motive to destabilise the government is going to be a big failure. It will be a national shame for them," he said.

The Congress has called a meeting of its Karnataka legislature party on January 18 amid efforts to keep its flock together as it accused the BJP of indulging in horse-trading to destabilise the state government.

Asserting that the Congress MLAs were "intact," the party leaders dismissed reports claiming that some legislator were ready to quit and said that there was no threat to HD Kumaraswamy-led government. "Congress Legislature Party meeting presided by CLP leader Siddaramaiah is scheduled for 3:30 pm on January 18 at the Conference Hall of Vidhana Soudha (state secretariat)," Siddaramaiah's office said in a statement on Wednesday. The meeting assumes significance following attempts by the Congress to reach out to its disgruntled MLAs, who are allegedly ready to jump ship to the BJP side.

According to Congress sources, few ministers from the party have even offered to step down in the larger interest and to keep the coalition intact. The party leadership is also looking into the option, they added

Asked about plans of the BJP to weaken the coalition partners in the run-up to the Lok Sabha elections, Venugopalsaid, "How can you (media) say that? Then, why is it that they are taking their MLAs from one hotel to another?"

Meanwhile a group of Youth Congress workers on Wednesday protested outside a resort in Haryana where the BJP's Karnataka MLAs have been camping in an "effort to thwart any poaching attempt" by the ruling JDS-Congress coalition.

Sources said BJP's Karnataka unit chief BS Yeddyurappa is likely to hold a meeting with the party MLAs who are camping at the resort and discuss the prevailing situation in the state. They said the 104 BJP legislators will stay put till the top leaders in the party give their nod to return to Karnataka. Mobile phones of the first-time MLAs have been "kept aside" to safeguard them against any poaching attempt, the sources said.

However, tuling out any "operation" by the ruling alliance to poach the BJP MLAs, Karnataka chief minister Kumaraswamy said there was no necessity for it and that he was "relaxed."      "It is not necessary for me to carry out any operation (poaching), actually there is sufficient numbers with me.. Every thing is under control... don't worry," he said.

Clarifying that his party MLAs were not being shifted to any resort, as being speculated in the media, the Chief Minister said, "We are not going to shift anyone to any resort, there is no need for it." "So I request media not to fool itself and the people of the state," he said.

However, it was not clear whether Congress would shift all its MLAs to a resort on Wednesday or not. Reiterating that the five Congress MLAs, who are in Mumbai, allegedly under BJP's control, were in touch, Kumaraswamy said, "I have been saying for the past three days that they are in touch with me, I'm in know of all the developments." "They may not be reachable to others, but they are reachable to me...," he said in response to a question whether the five MLAs were reachable.

Hitting out at media over reports about instability of his dispensation, Kumaraswamy warned them of losing credibility. "You people are going to ruin the credibility of Kannada news channels," he said. "Do you know the situation better than me? Working as the Chief Minister won't I know what is happening," he added.

Meanwhile, BJP general secretary Muralidhar Rao said it was wrong on part of the Congress to charge the BJP with attempting to "topple" the government.

In a setback to the coalition government on Tuesday, two independent MLAs R Shankar and H Nagesh withdrew support amid charges that the BJP was engineering defections to topple the Kumaraswamy government. Rao said the withdrawal of support to the coalition government by two independent MLAs was an offshoot of internal bickerings among Congress leaders, mainly DK Shivakumar. Attacking Shivakumar, Rao said he was the main culprit behind the fresh political turbulence as he wanted to project himself as the "true loyal Congress leader".