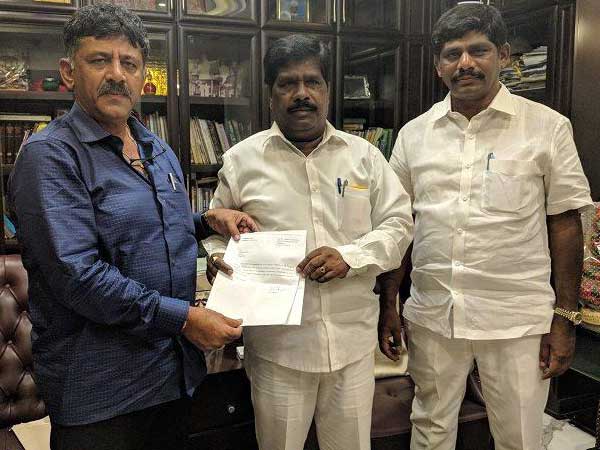 In a jolt to the HD Kumaraswamy led Congress-JD(S) government in Karnataka on Tuesday , two Independent MLAs withdrew support to the seventh-month old ministry amid turmoil triggered by charges of horse trading flung at each other by the ruling coalition and BJP.

In a significant turn to the political war that erupted on Monday with both sides venting their fears of poaching, H Nagesh (Independent) and R Shankar (KPJP) wrote to Governor Vajubhai Vala, conveying their decision to withdraw their support with immediate effect. Both lawmakers, staying at a hotel in Mumbai, sent identical letters to the Governor and requested him to take "necessary action", a move that reduced the ruling coalition's strength to 118, but still kept it in the safe zone in the 224-member assembly.

Putting up a brave face, Congress and JDS top leadership said that the government was safe, with a seemingly unfazed Kumaraswamy saying his ministry was stable and "I am very totally relaxed."

The action by Nagesh and Shankar came even as the 104 BJP MLAs were hunkered down at a resort in Haryana's Nuh district near the national capital, fearing their poaching by the ruling coalition. Shankar was dropped from the Ministry during the recent cabinet rejig, reportedly for showing reluctance to be an associate member of the Congress. Nagesh was miffed over not being included in the Ministry. During the ministry formation exercise after the May 2018 assembly polls, Shankar had announced support to the BJP, but made a last minute switch towards Congress. Nagesh, a former member of Congress, had contested and won as an independent candidate after not getting the party ticket.

"I know my strength. My government is stable. Don't worry," said Kumaraswamy as he sought to portray of picture of being unperturbed by the development, insisting that the two MLAs action would have no bearing on his ministry. He added, "Whatever are the episodes in our Kannada (TV) channels going on from last one week I am enjoying it."

Taking a swipe at the BJP, the chief minister said, "What is going to happen? If two independents declare support (to BJP). What will be the numbers? I am totally relaxed.I know my strength"

However, Union minister DV Sadananda Gowda said the BJP would stake claim to power in Karnataka if the Congress-JDS coalition government falls. "The friendship is at the brink of divorce. It is time for break-up. A party with 37 seats has formed the government. It will collapse on its own due to squabbling. If the government collapses, we will certainly form the government," Gowda told reporters here.

Gowda was replying to a query on whether there was any likelihood of the BJP staking claim to power in the event of the collapse of the coalition government.

JDS chief and former prime minister HD Deve Gowda also said nothing would happen to the government headed by his son. "It is not in anybody's hands, including the media. However much you cry hoarse, nothing will happen because it is in the hands of God. When a party (JDS) of 38 MLAs gets the blessings of a national party (Congress), it is all the wish of God," Gowda said.

He also criticised Prime Minister Modi over allegations that Rs 60 crore and ministerial positions were offered to the MLAs of the ruling coalition by the BJP. "Does it look good that a national party (BJP) is hoarding its 104 MLAs? I am not talking about Amit Shah, but Modi, who talks a lot throughout the day," he said.

In charge of party's Karnataka affairs, Venugopal alleged that the MLAs of the Congress-JD(S) ruling combine were being offered a "lot of things" by the BJP to switch sides. Brushing aside any threat to Kumaraswamy, Venugopal said the coalition government would continue despite the BJP's "ugly and dirty" horse-trading attempts. "We are confident that the Kumaraswamy government will continue. Even though they are offering a lot of things to our MLAs, we are very confident. We are in touch with all our MLAs.Our people are with us. Our government will continue," he added.

The Congress has convened a meeting of all its MLAs on Wednesday to take stock of the evolving situation, party sources said.

BJP state president BS Yeddyurappa, former chief minister Jagadish Shettar and other senior leaders like Shobha Karandlaje are among the 104 MLAs staying in the ITC Grand Bharat resort in Hasanpur Tauru in Nuh district since Monday. Sources said the BJP legislators have been shifted to the resort in an attempt to keep the flock together and thwart any poaching attempt by the Congress-JD(S) combine. "We’re staying in the resort. We don't know how long we are going to be here," said Shettar.

Yeddyurappa has rubbished reports about the BJP attempting 'Operation Lotus' to topple the government and said there was no truth in it and alleged that the Congress-JD(S) combine was trying to lure Opposition MLAs.

'Operation Lotus' is a reference to the BJP's alleged bid to lure several opposition MLAs to defect to ensure stability of its then government headed by Yeddyurappa in 2008. In the 224-member Assembly, BJP has 104 members, Congress-79, JDS 37, BSP, KPJP and Independent one each, besides Speaker. BSP, KPJP and an Independent are supporting the coalition.